Last month, a couple of big pieces of news caused quite a stir in the world of mobile publishing. First, Facebook announced that it will be opening up its Instant Articles program to all publishers on April 12th of this year. A week later, Google rolled out a change that made AMP (Accelerated Mobile Pages) webpages more visible in mobile search results.

Both Facebook and Google have stated that the main motivation for developing these publishing formats is to help overcome the problem of slow page load times on mobile devices. But some publishers are concerned about the limits these formats may place on the layout of their pages and how their ad revenues will be affected.

We’ll discuss these concerns a bit more in a moment, but first, let’s take a look at some of the basic features of these two formats.

Instant Articles is a tool that lets publishers convert their content into a format that loads within the Facebook app whenever someone clicks on the article link while browsing their news feed. Facebook actually hosts the content instead of redirecting the user to the publisher’s website, and the Facebook team claims page load speeds are up to 10 times faster than standard mobile articles. 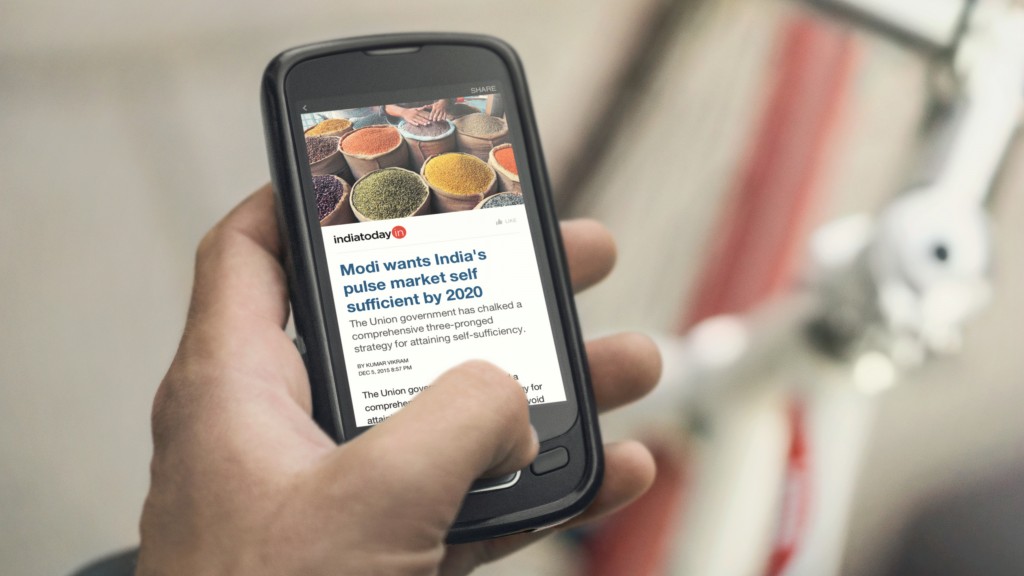 How much work does it take to become an Instant Article publisher? After an initial setup that involves the creation of a custom RSS feed that converts a site’s content to the Instant Article format, the publishing process is basically automated. More information is available on Facebook’s developer site.

If your website is WordPress-driven, the process of conversion should be fairly straightforward. WordPress plugins that handle everything needed to export your site’s content into Instant Article format are already starting to pop up. One in particular, Facebook Instant Articles & Google AMP Pages by PageFrog, has been getting good reviews so far.  Over the next couple of months, I’m sure we’re bound to see many more.

In order for users to view an Instant Article, they must have Facebook for iPhone Version 30.0 and iOS 7.0 and above, or Facebook for Android Version 57 and Android Jelly Bean and above. Currently, publishers need to submit a form to Facebook if they want to produce Instant Articles, but as mentioned earlier, Facebook plans to open up the program to everyone by April 12th.

Google publicly announced the Accelerated Mobile Pages (AMP) Project back in October of last year as an open source project with the goal of improving mobile user experience. At the end of last month, the search giant followed up by featuring AMP results more prominently in its mobile search product.

The AMP format utilizes the aptly-named AMP HTML, which is a subset of HTML with restrictions that are intended to improve a page’s load time. According to Google, “webpages built with AMP load an average of four times faster and use 10 times less data than equivalent non-AMP pages.” Unlike Instant Articles, AMP webpages can be viewed in any modern web browser.

When an AMP article appears in Google mobile search results, a small lightning bolt icon is shown next to the result to make it easier for users to identify (shown in the left screenshot below). Tapping on the result will bring up the AMP-optimized page (screenshot on the right below), which is hosted on Google’s AMP Cache servers instead of the original publishing site. 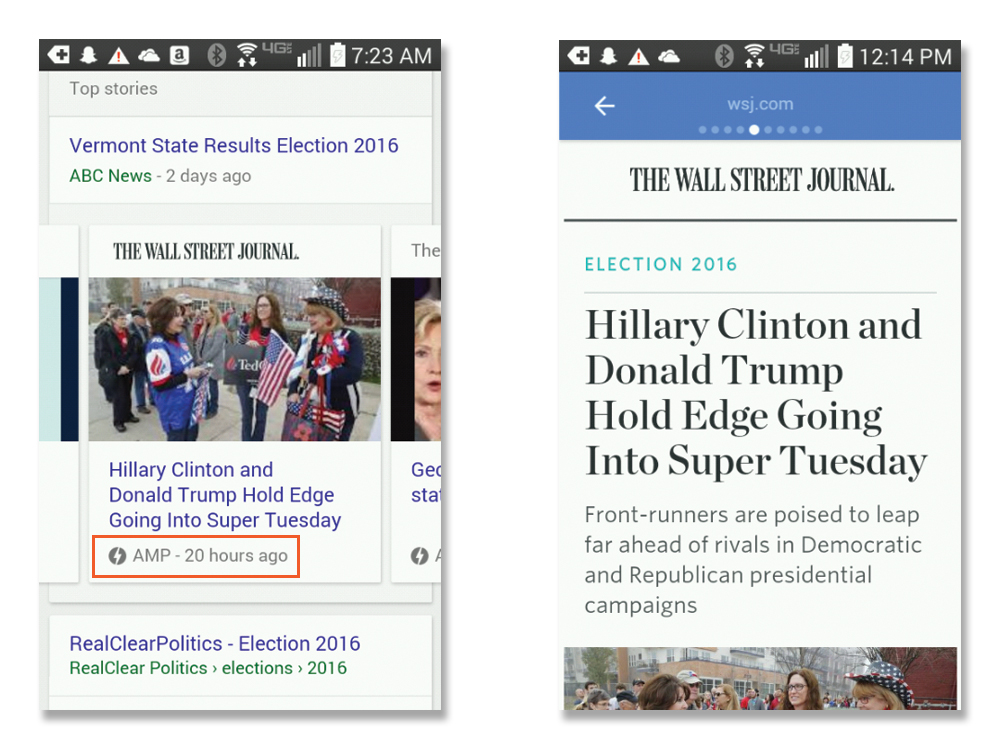 For publishers who want to create AMP content, there is an extremely well-documented developer’s guide at the Accelerated Mobile Pages Project website. As with Facebook Instant Articles, the process is even more streamlined for WordPress users. All sites hosted on WordPress.com now support AMP by default, meaning AMP pages for content published on those sites are being generated automatically. In addition, publishers with self-hosted WordPress sites can install a plugin, such as the PageFrog option mentioned above or Automattic’s AMP, to do all the heavy lifting for them.

To give you an idea of the different appearances of the format, the screenshot below shows the standard web format on the left and the AMP format on the right for a recent article published on the WordPress.com news blog. 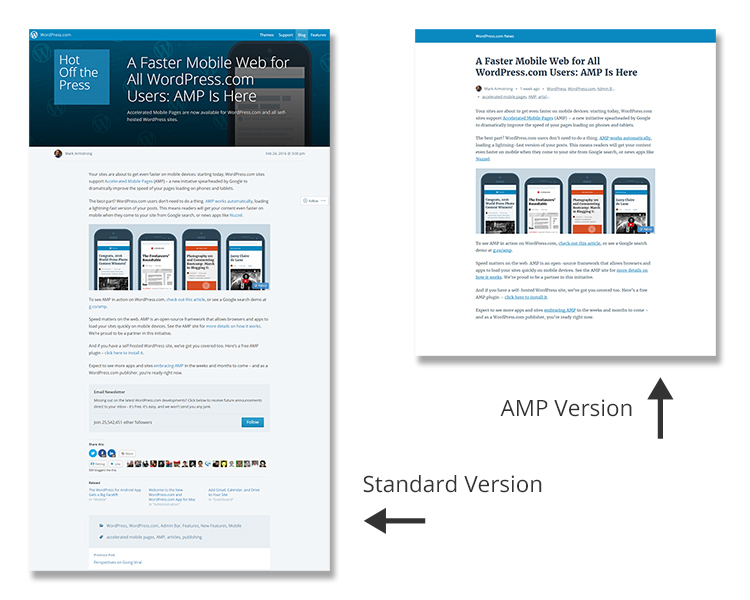 If you’d like to view these differences more closely, check out the following links.

What About Ads on FBIA and Google AMP?

While no one is complaining about the potential for faster page load times, speed is not the only variable to consider when it comes to mobile optimization. Even if it were, there are lots of other factors besides webpage format that impact load time, such as Internet connection quality and the hardware and software specifications of the device being used. The fact that early adopters are reporting improved performance is a good sign, but we’ll need more time and data to see if these same results can be realized by publishers across the board.

All that aside, many people in the publishing world are concerned about what type of impact these formats will have on their ad revenues. First off, there is the worry that if they do not embrace these new formats, their traffic will suffer – which, in turn, will cause ad earnings to drop. Secondly, if they do start publishing their content in Facebook Instant Articles and AMP formats, will the limitations on page layout restrict their abilities to maximize their earnings.

In addressing the first concern, Facebook has clearly stated that Instant Articles will not be favored in the News Feed simply because of their native format. They’ll be ranked using the same criteria as any other shared story, which includes a number of engagement factors such as time spent reading the content and how many people interact with it. However, what is not clear is if the improved load time of these articles will impact these engagement factors, causing an indirect boost to News Feed ranking.

As reported by Barry Schwartz of Search Engine Roundtable, in a recent Google Webmaster Central hangout, John Mueller of Google said that AMP is currently not a search engine ranking signal on its own, but then continued on to say that it “kind of picks up the mobile friendly thing.”

Both of these formats are still evolving so what’s true today may not be tomorrow. With that being said, one of the main goals of developing and implementing these formats is to improve engagement and user experience. So, there is a good chance that both Facebook Instant Articles and AMP webpages could improve your content’s visibility potential, even if indirectly.

Publishers using Facebook Instant Articles can use their own ad servers in addition to Facebook’s Audience Network, but they still have to adhere to certain policies and guidelines in addition to any layout restrictions. According to the Instant Articles FAQ, these guidelines include only allowing one ad per every 350 words of the article or “if your article consists primarily of images or media, ads must not exceed 15% of the content.”

Ad functionality within AMP environment is still evolving, but Google has stated its goal is to enable publishers to use the ad servers of their choice and have full control over ad placement, among other factors. Currently, more than 20 ad tech providers – including AdSense, DoubleClick, and OutBrain – support AMP to at least some degree.

One of the issues that publishers may have to work around is that the use of JavaScript is very limited on AMP sites. Stripping the JavaScript from a page may make it load a lot faster, but it can also remove the ads along with it if the ad tech vendor isn’t AMP-compliant. At this point, though, it’s hard to say whether this is merely a growing pain of the new format or if it is an issue that will persist for a while.

For more details about ads on AMP webpages, check out this recording of a recent Google News Lab Hangout in which Craig DiNatali answers questions related to AdSense, DFP, ad sizes and more.

Both AMP and Facebook Instant Articles are still relatively new formats and, as such, expect to see them continue to evolve rapidly over the next few months. One thing is certain though: With tablet and smartphone usage accounting for over 50% of the time the average American spends on the Internet, all publishers need a strong mobile strategy if they want to stay competitive in today’s landscape. We’ll keep updating you on the latest developments for AMP and Instant Articles to help you decide if you want to make these formats part of that strategy.

Note: Ezoic is currently working on building tools to help publishers integrate AMP and Instant Articles. We’ll continue to keep you posted on our progress.