The State of Programmatic Revenue in 2019

Buyers are projected to allocate more of their budgets into programmatic direct deals in 2019 and as a result, publishers will likely see increased programmatic revenue from digital display advertising.

Digiday reported recently that 55% of 187 surveyed publishers received the majority of their total business earnings from programmatic revenue in early 2019.

This trend is expected to continue throughout 2019, as the Digiday survey also reported that two-thirds of its surveyed publishers make over half their inventory available to programmatic purchasing. Programmatic advertising continues to be increasingly lucrative as more ad revenue filters in from traditional advertising sources, like radio and TV, and publishers streamline the way they sell their ad inventory. Advertisers and Publishers Will Benefit From Programmatic Deals

US publishers have always been at the head of programmatic revenue, though European publishers are beginning to catch up. 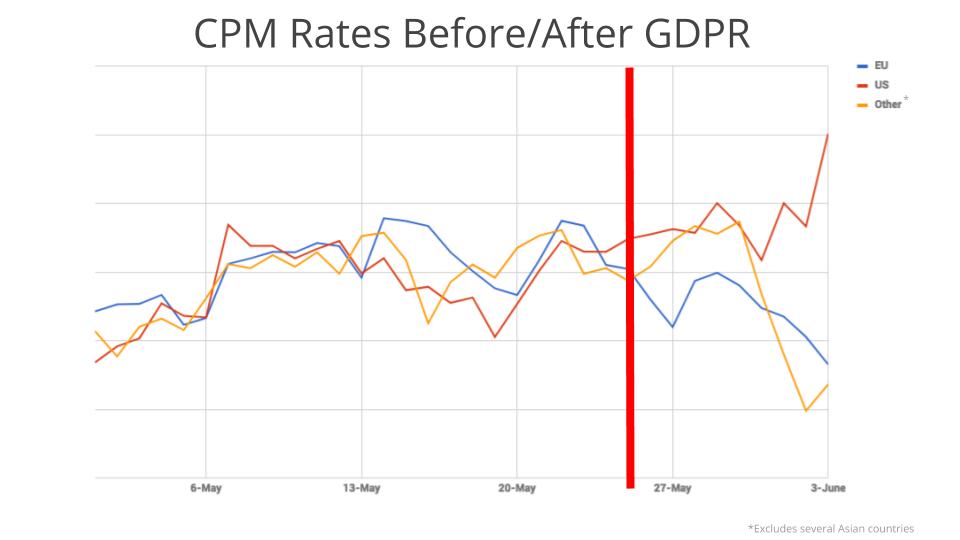 The impact of GDPR on CPMs was felt across the entire ecosystem and was something we reported on late last year as well.

By the end of 2018, programmatic revenue recovered for most publishers, though the majority of programmatic inventory now comes with consent strings, or a list of numbers to help identify users who have consented to share their data. This allows publishers to follow GDPR privacy guidelines while still offering audience data that advertisers desire.

Historically, advertisers have been wary of programmatic advertising because of ad fraud and wanting more control and transparency regarding ad visibility. However, with tighter regulations and technology, like ads.txt, the ecosystem is beginning to help better support these large digital investments.

It is has been shown that some buyers are especially interested in inventory with consent strings and are more willing to pay a premium for this type of inventory. Additionally, buyers are increasingly interested in engagement and publishers that are able to keep visitors engaged in their content. This is something they measure through a number of different metrics automatically.

Advertisers have been shown to bid more programmatically when publishers are able to improve engagement on their websites.

Programmatic advertising has typically been used for what we think of as typical display advertisements. These are stagnant, pictorial messages in headers, sidebars, within content, or in the footer.

While video inventory has been growing in popularity, 2019 reports suggest that online videos will produce $15.4 billion and take 80% of all internet traffic.

These kinds of video content projections are spilling over into the advertising world with instream and outstream video advertisements. Originally, these types of ads were only purchasable via direct deals or in real-time bidding auctions, but are now available to purchase programmatically through techniques like pre-bidding. Most of us know about instream videos, even if we aren’t familiar with the term. Instream videos are short video advertisements located before, during, or after a video is played. YouTube and Facebook use pre-roll most often before a selected video is played, while longer videos often have mid-roll videos that must play before a user can finish the rest of the video.

You’ve likely seen an outstream video plenty of times before as well. Outstream videos are large video advertisements placed within the middle of text content that auto-plays once a user navigates to that part of a page.

While growing in popularity, outstream video is swarmed in some controversy. While know for strong ad rates in many cases, video ads can have a massively negative effect on visitor experiences in many cases. This can cause harm to other ad inventory and total session revenue if publishers abuse the technology.

Outstreaming is gaining traction now because up until recently, advertisers weren’t able to run a video ad without an actual video to place the ad in. This meant that if a publisher did not have video within their content, advertisers were not able to place video ads in that content. Video advertising mainly lived on sites like YouTube.

What Does All Of This Mean For Programmatic Revenue In 2019?

All in all, programmatic revenue has been on the rise for the last three years. It’s typical for the display ad revenue record to be broken on Black Friday, but in 2018, it was broken in June and then again on Black Friday, which is unprecedented. Programmatic deals will continue to rise in popularity because they bring digital scale to both publishers and buyers, as they try to optimize digital performance, efficiency, and integrity.

More specifically, programmatic direct deals are becoming more popular because it allows advertisers and publishers to work directly together to set fixed prices for premium inventory and a guaranteed number of impressions.

Ultimately, there is more money and more regulation in the digital ecosystem in 2019 than there has ever been before. This is good for publishers and advertisers alike and a trend that is likely to continue.

Have a question or comment? Leave your thoughts below.