The Benefits of Testing Ad Location

Ad testing seems fairly straightforward, and it’s probably something most publishers have had at least some experience with. Many initially take the approach of A/B testing ads. While this might seem like the logical place to start, A/B testing ads can actually lower ad rates, and subsequently, ad revenues.

As a publisher, you probably spend the majority of your time publishing content on your site. Ad testing using traditional methods can be cumbersome and yield mixed results. Ad testing should prioritize your site’s revenue, user experience, and long-term growth potential.

Below, I will take you through the benefits of testing ad location on your site.

What effect does smarter ad combinations have on a site?

The quick answer is that smarter ad combinations will both improve UX metrics and increase ad revenue. The biggest issue with ad testing, though, is that it’s different for every user. Every user has a different threshold for ads. If you show everybody 6 ads, for example, one user might bounce while another stays. Those who bounce are then lost the potential for creating future revenues.

Also, if you bounce users often enough, the number of advertisers will be lower on your site, or they might blacklist you inside of Adwords because the viewability of ads on your site is so low. With a click of a button, advertisers can remove their ads from populating on your site. The above example is what you don’t want to happen on your site. I mentioned before that static ads (i.e. ads in the same place) versus showing different ads to different users (multivariate testing) based on preferences usually results in a net increase in revenue of about 56% on average.

See how several publishers increased revenue over 300% by simply segmenting visitors based on test results vs. implementing test results.

Most publishers know that it is important to show a certain number of ads to make maximum ad revenue, but many don’t understand how important it is to avoid spamming away users. Every user on a site interacts with it differently and different locations may influence each user in a different way. Tom may come to a site and find mobile ads above the fold annoying, causing him to leave after one pageview. Perhaps normally he would have visited 2 pages. This means the publisher potentially missed out on double the amount of revenue.

On the other hand, if the publisher then decides to remove all mobile ads above the fold, perhaps their total RPMs decrease and they make less revenue than they could on all the users that are the opposite of Tom.

When you start to think of it this way, testing ad location becomes a bit intimidating. How is it possible to truly optimize in light of all these constantly changing variables?

In our research that was collected from over 21,000 sites, testing thousands of ad combinations is the only accurate way to keep ad income on an upward trend and keep user experience protected.

Typically, publishers are met with the ‘UX vs Monetization’ problem of, “how do you maximize both without taking away from the other?”

We’ve found this level of testing truly is able to account for all factors and allows sites to balance both UX and monetization. 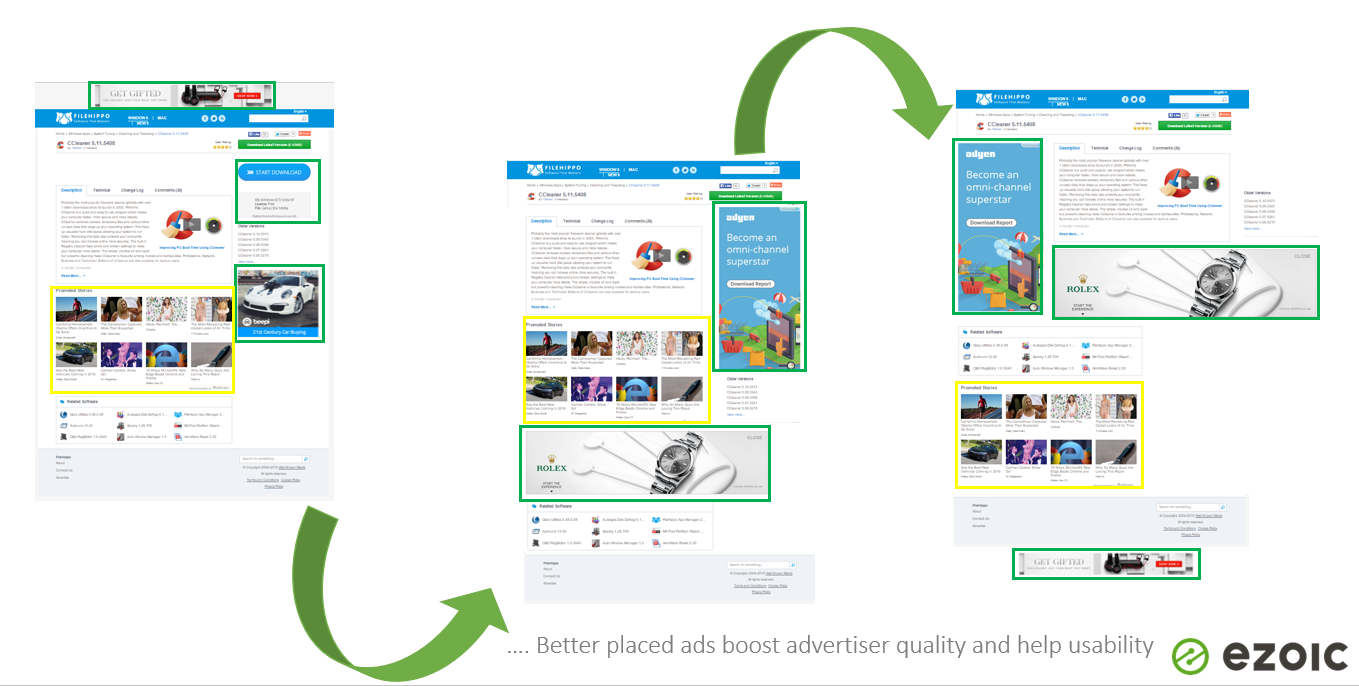 We’ve been able to prove this model out over time. There are simply too many combinations and variables to account for in traditional A/B (or manual) ad location testing models. Site owners must employ a form of multivariate testing.

Why automated testing and segmentation may work best

Automated testing means you can leverage vast amounts of user data without having to rely on personal opinion to decide upon where the ads should go. Plus, depending on how many ad units you test, the number of possible combinations grows exponentially.

These combinations quickly become impossible to perform manually by one person, or even a large team of people. Mathematically, it may take months or even years to perform the tests.  That’s where Machine Learning steps in. Ezoic’s A.I. technology can reduce that time to days or weeks.

Which revenue metric is most valuable to my site?

The most valuable metric to your site is EPMV (Earnings per thousand visitors). With the sites we’ve collected data on, we’ve found that testing ad location for each session trumps RPM-based optimization. Below is a video that explains EPMV more in-depth.

EPMV (earnings per thousand visitors) is the best way to objectively tell if a publisher is actually earning more revenue from the exact same amount of traffic than they were before. EPMV isn’t like RPMs or CPMs. It is not diluted by pageviews or the total amount of ads on the page. EPMV looks at the value of all the ads from an entire visitor session.

Users who see too many ads too early in a user session are more likely to bounce away from the site. Visitors who bounce away from your site engage with fewer ads overall.  Fewer ad views overall mean fewer ad dollars and reduced income. That’s the opposite outcome most publishers who rely on ad revenue desire.

Remember: Google often automates display ad campaigns for people. Let’s say I’m an advertiser, and all I want to do is have people buy my product. Google is going to learn over time what type of visitors are most likely to click on the ads and buy it. If you’re constantly showing ads in locations or densities to people who are unlikely to do it, Google is not going to put advertiser bids for the publishers that are automating those campaigns.

Should I test ads and segment visitors?

The thing about testing is that it’s never done. Multivariate testing cannot end with a final result. Ultimately, tests should help you segment visitors and deliver each one a different combination based on how similar visitors have responded to previous tests. This must be done using some form of automation because a human is physically unable to do this level of testing and segmentation. Will testing ad locations improve the quality of my ads?

Yes, but like I mentioned before, good science dictates that adjusting ad locations is never-ending. Getting ads in better positions over time means that visitor engagement improves and so does the traffic quality From an advertiser’s perspective, this is better; they will want more of those ads and will pay more for them, too.

We’ve found that to do segmentation well you need to find and optimize the combinations of ads that maximize revenue by taking into account thousands of variables for every different kind of visitor you can imagine.

Here are some (of thousands) of the variables that Ezoic A.I. uses to make ad location decisions: As you can see, it would be terribly inefficient to work this out manually.  It’s a matrix of decision making that feeds into boosted earnings, boosted UX and, ideally, both metrics at the same time.

Ad quality is tied to visitor engagement or ‘intent’. Visitors who are actually engaging with your content are better for your advertisers.  One of the biggest factors in ad testing is making changes according to the traffic source.

What page a user is reading, the traffic source, and geographic location all have a marked effect on what ad combination should show.

There is no reason why all visitors should see the same ad combinations. Each user should get an ad combination that complements the page they are reading and enhances their overall user experience, taking into account upstream traffic sources, device size, geographic location and any other factor that can boost user engagement and ad earnings.

What is ad blindness?

Ad blindness, also known as banner blindness or banner noise is where visitors to a website consciously or subconsciously ignore banner-like information. 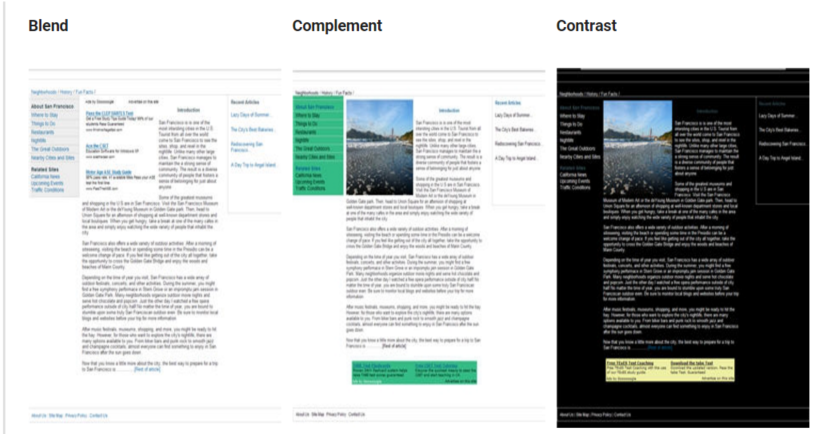 It’s much more powerful to do test ad blindness, ad locations, and sizes in combination. But, most publishers are busy, and this process can be tedious. The main reason most publishers don’t continue ad testing is that it is an arduous process if you’re doing it manually.
Many do more harm than good with their tests because they don’t understand the long-term effects of implementing the results. 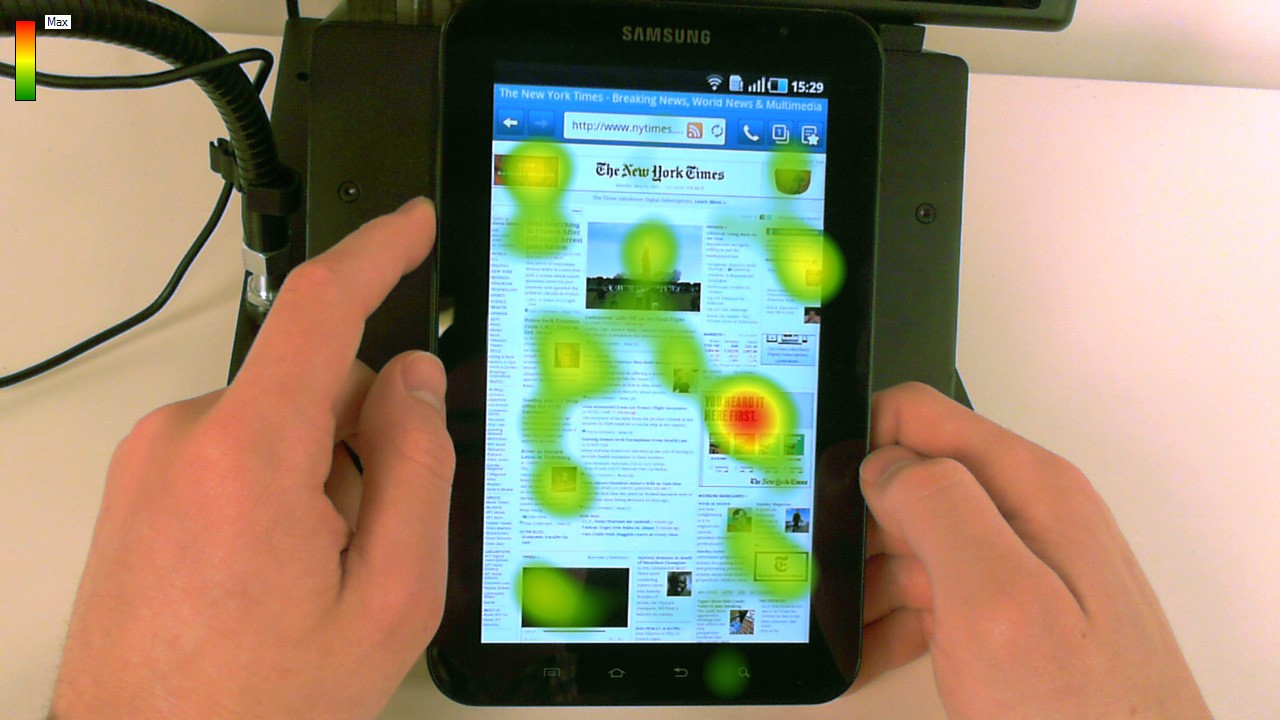 Yes, and the knowledge gained is powerful. That data can be used to guide your content strategy, improve user experience, and increase your ad revenue—all at the same time. When you have this type of data, you can fine-tune which articles are performing better than others and adjust accordingly.

Some articles are inevitably going to be more engaging than others, but having the right ad combinations on the page will enhance the user’s experience of that article and boost earnings. Ad location is not the only element to increasing your site’s engagement and earnings, though.

We’ve written a lot of how-to content regarding content optimization and increasing earnings. Here are a few of those articles:

While there is no magic wand for increasing revenue, our research shows that multivariate testing proves to be pretty close. It’s by far the best way to optimize ad locations and earnings. If you have any questions, I’ll try to answer them below.