If you’re a digital publisher or website owner, it’s extremely likely you’ve been paying close attention to Google’s AMP (Accelerated Mobile Pages) Project. It’s possible you’ve experimented with AMP on your own site. As a Google Certifed Partner with our own AMP Converter, we’ve had the pleasure of seeing Google AMP results and data from dozens of major publishers that have implemented the mobile technology already. 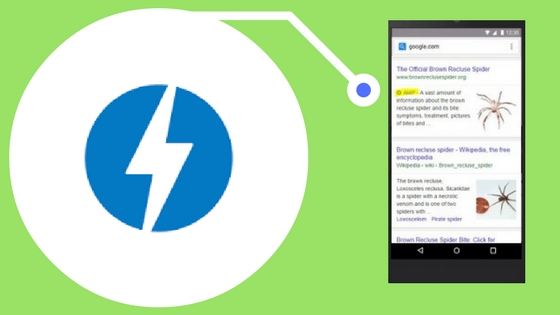 Below, I’ll share with you some of the main challenges, benefits, and learnings we’ve had with AMP so far. Some of the criticisms of AMP to this point are actually unfair — while others aren’t even being discussed.

Ultimately, publishers implementing AMP see impacts on their SEO, ad earnings, and user experiences. Understanding what to expect in each of these categories today — and into the future — are critical for building a successful mobile publishing plan for the future.

AMP, SEO,  and positioning with Google

Early on AMP was really heralded — and unofficially marketed towards— news publishers. The big incentive for these publications was the AMP carousel. The AMP carousel took AMP news results and placed them right at the top of search query results. 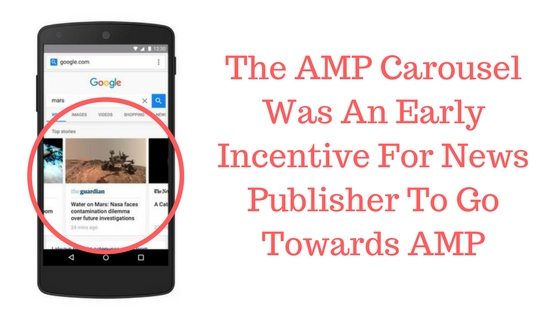 Bam! Instant pseudo-number-one rankings. This was a great way to encourage large publishers to experiment with AMP and led to a bit of a myth regarding the massive “SEO” impact of Google’s accelerated mobile technology; however, it did lead to some strong early adoption among these audiences.

The generalized response from a lot of these very large, branded news publishers early-on was positive. They saw major traffic increases that they could directly associate with AMP and were bullish on the technology; despite some other drawbacks (we will get into those in a minute).

Other publishers — without the benefits of a major brand or a designation as a “news” publisher — were more critical of some aspects of the technology.

Is AMP A Ranking Factor?

Before we get into some of the major challenges everyone has with AMP — and some of the ones that only non-news-publishers have — let’s revisit a few statements I made earlier.

“…this led to a bit of a myth regarding the massive “SEO” impact of Google’s accelerated mobile technology” – Me, earlier in this article 🙂

I mentioned two terms above that I should probably elaborate on further;  pseudo-number-one rankings and a myth regarding the SEO benefits of AMP. Let me break down both of these proclamations. 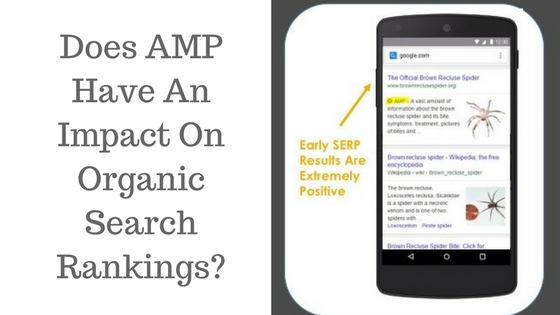 This was misinterpreted by some as Google “ranking” AMP pages higher. I guess technically they did, but this isn’t really isn’t organic search positioning. The traditional SEO benefits were not something that many actually have measured very well until now.

The truth is that AMP actually does offer some tangible organic search ranking benefits to all publishers; not just large, branded news publishers. However, these results are not as dramatic as some have advertised, but certainly exist beyond what Google may have you believe.

We hosted an event with Google back in September of this year, and they got up in front of everyone and chose their words very carefully when discussing this topic (you can see below).

Google claims that AMP is not a ranking signal for their search algorithm; which I’m willing to bet is technically true. But what Google says and what they mean can often be very different. They chalk up the universal boosts in rankings seen by most publishers to faster pages when using AMP (which is a ranking signal), but there are likely other things at play as well. Sometimes Google builds things to work one way and they actually work another.

You can see the publisher in the graph above saw significant increases in mobile keywords that they ranked for after implementing AMP. This was a really common occurrence we saw across many sites.

Pretty much every major publisher that we’ve helped move to AMP using our converter has seen some kind of benefit in the number of mobile keywords they rank for in addition to increase in mobile organic traffic.

For this reason, if you are considering AMP for mobile organic traffic alone, it is a big winner; however, it’s actually a lot more complex than that.

How user experiences are impacted by Google AMP?

First and foremost, Google’s AMP makes web pages super fast. They load almost instantly. This has been proven to have an impact on bounce rates over and over again (which is a core user experience metric). For a lot of sites, implementing AMP had a big impact on this metric (which arguably is another contributing factor in SEO). 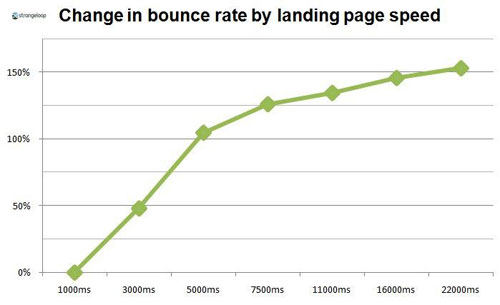 When we looked at dozens of medium-large-sized publishers that had implemented AMP, the results were mixed. Most saw mobile bounce rates on their site decline slightly or hold steadily; however, a few saw major improvements, and these ultimately were the ones with the greatest SEO impact as well… coincidence? I think not!

The site above saw bounce rates decline from 76% to 63% on mobile in the 30 days following the implementation of AMP on their site.

In most cases, the sites did not see dramatic impacts on pageviews per visit (some slightly increased, some decreased). However, on the sites that saw bounce rates improve, they also typically saw time on site (session duration) improve as well.

These UX metrics are essential to site growth, organic positioning within Google Search, and ad revenue. It makes total sense that the publishers who were able to improve these metrics with AMP saw major improvements in organic search traffic as well.

What we can infer from this data on these sites is that the sites that benefitted the most from AMP were the ones that saw UX metrics improve from implementation. This is likely due to dramatic improvements in pagespeed alone.

If you struggle with site speed consistently or have issues with core UX metrics on mobile, AMP may be strongly worth considering; however, it is not without its challenges…

Why are the results on UX mixed in other studies?

This is actually really easy to explain in my opinion. In many cases, AMP implementation is being done by WordPress plugins and developers who are struggling to bring typical site features into the simplified AMP HTML version of sites. This has a led to the reputation that AMP sites are more remedial and simplistic than normal mobile pages. 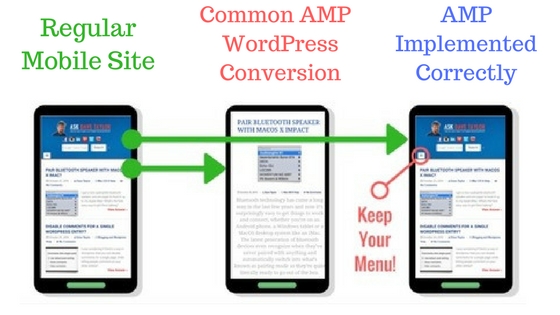 The truth is that because of the evolution of the AMP Project (developers and organizations can contribute to it in an open source format), sites can bring all of their normal mobile elements and functions into AMP now. The problem is that it actually is a fairly technical process, and if a developer is not familiar with the ever-changing AMP Project, they may not be able to deliver a great AMP site or transition into AMP in general. 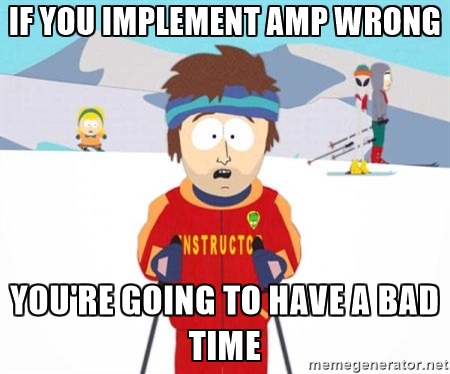 In our experience, having an AMP version of your site, that looks like your regular mobile responsive site, is very achievable. Our strong recommendation is to not release a simplified version of your mobile experience on AMP. Even Google says this is a bad call. The goal is to improve user experiences, not make them worse.

So, we’ve pretty much covered all the good with AMP, and the caveats that come along with all of those different elements. Now, here comes the bad.

In most cases, sites earn less ad revenue with AMP. Google was actually touting that AMP pages earned more in the beginning, but they were only looking at Google revenue. Few medium-large publishers are exclusively using AdSense or Ad Exchange, so looking solely at Google revenue is a bad way to see how AMP pages are earning overall.

The problem is the reduced competition for ad inventory in AMP (more below). There is a way around this, but it has not something most publishers are aware of. 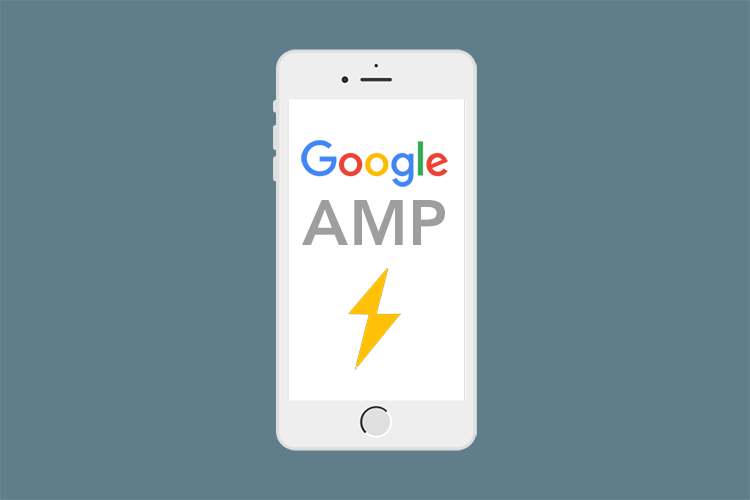 Since Ezoic is demand agnostic, we’ve been able to see the biggest challenge for AMP standout probably more than most. AMP’s single tag setup forces publishers and ad ops professionals to choose a single tag to monetize on their AMP pages. This is in direct opposition to how many sites operate.

Having only a single ad tag available on AMP forces sophisticated publishers to choose between their first look providers (like Criteo), their DFP, and header bidders. The truth is that your ad inventory is most valuable when there is fair competition. AMP makes the environment less competitive.

We’ve been able to add the Ezoic tag to the AMP Project which actually does allow publishers to import (for lack of a better term) all existing demand partners into AMP along with any Ezoic ad partners they’re interested in trying as well. So far, the early results with this tag have been very positive. If you’re interested in trying Ezoic and AMP with your existing demand, you can sign up for our beta here.

The early call on AMP results…

AMP is still in the beginning, but Google is clearly behind it 100%. Both Facebook and Google both have embraced an accelerated mobile web in a very aggressive way.

I expect to see more evolutions and contributions inside the AMP Project to make it friendlier to non-news publisher over the course of 2017. As more and more sites make the transition, the data collected from these experience should drive the conversation forward even more.

I believe a lot more news will be coming out of the AMP Conference in New York later this year.