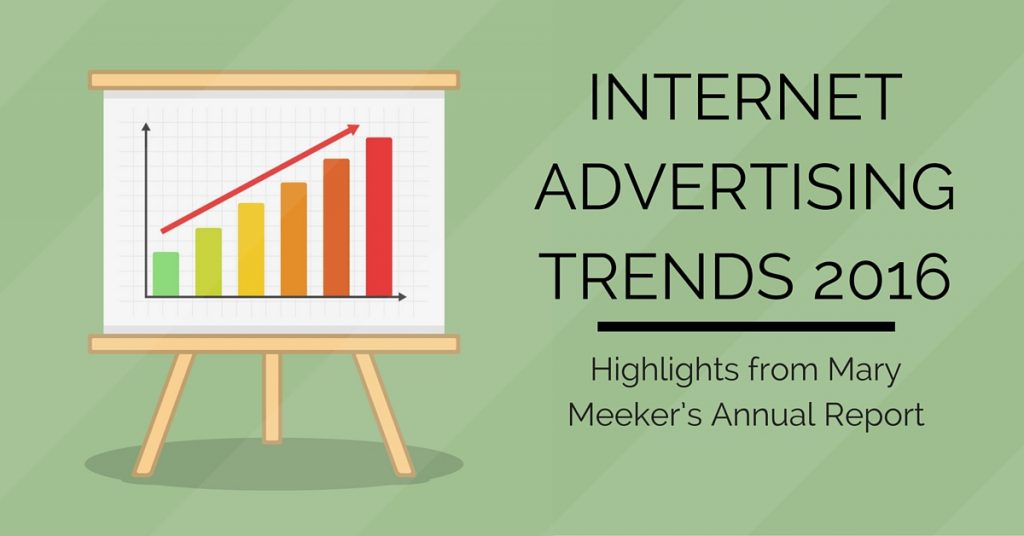 Each year, Mary Meeker of Kleiner Perkins Caufield & Byers (KPCB) produces her in-depth Internet Trends Report, and the 2016 version was just released at the beginning of June. This year’s edition is comprised of 213 slides that cover advertising and commerce trends, the re-imagining of communication and human-computer interfaces, data privacy and much more.

The full report is available on the KPCB website as well as on SlideShare. Here, we’ve pulled out some of the highlights that relate to Internet advertising and are likely to impact publishers.

Growth Rate of Internet Advertising in U.S. Continues to Climb

According to the IAB/PwC Internet Advertising Revenue Report for 2015, annual ad revenues for 2015 totaled $59.6 billion. This dollar amount is 20% higher than 2014’s year-end total of 49.5 billion. Meeker’s report includes the following chart that depicts Internet advertising growth for 2009-2015, allowing us to view this data in a historical context. 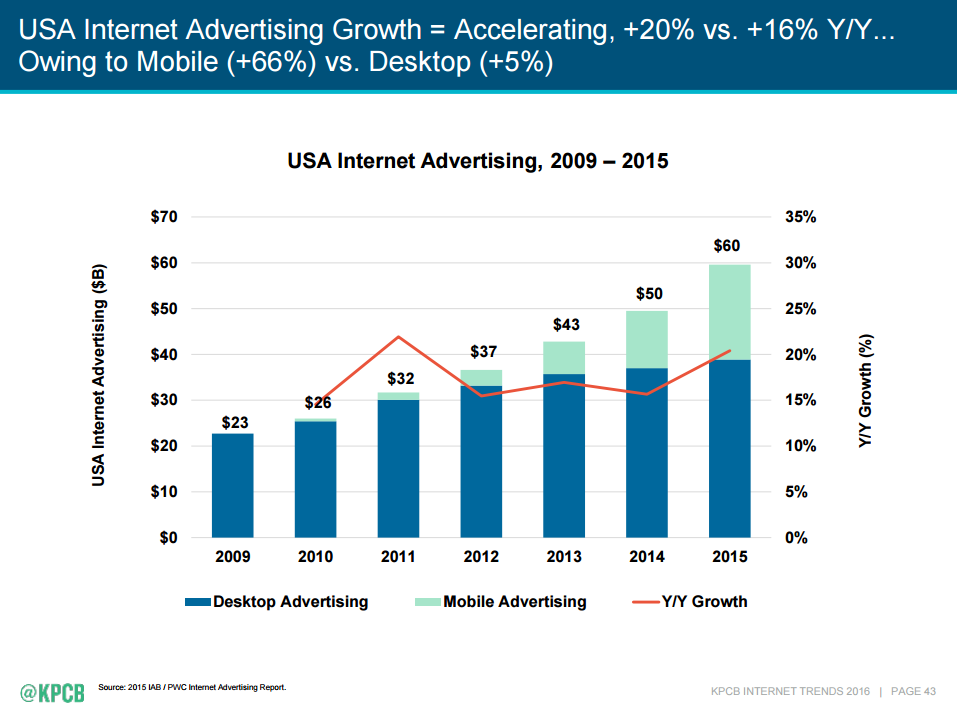 Most of this growth is attributed to mobile advertising, which accounted for $20.7 billion, or almost 35%, of 2015’s total Internet advertising revenues. In 2014, mobile ads only accounted for 25% of the yearly total. In fact, mobile ad spend grew by 66% from 2014 to 2015, while desktop grew by just 5% over the same time period.

Even with this accelerated rise in mobile advertising, there is still plenty of room for continued growth. Mobile now accounts for 25% of total media consumption time – with that total including print, TV and radio along with desktop and mobile usage – but mobile ad spending only makes up 12% of advertising budgets.

However, if you view that same comparison for all Internet (including mobile and desktop), things look a little different. In this case, the comparison seems pretty much on par with Internet usage representing 22% of total media consumption time and 23% of advertising spending. 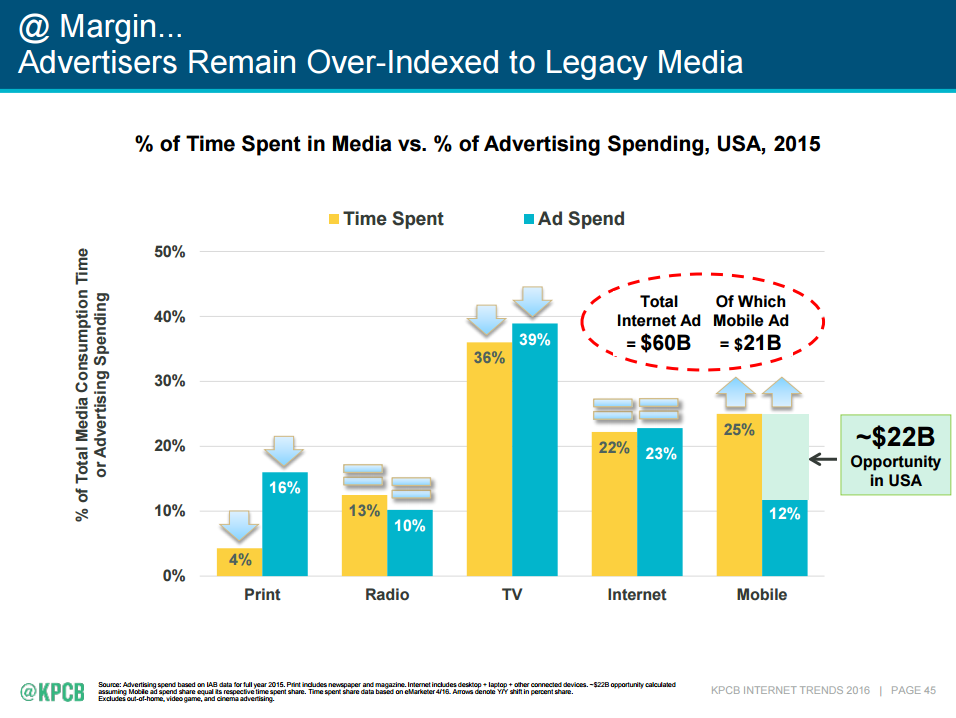 So, while mobile ad spending may continue to grow, it may start to do so at the expense of desktop advertising very soon.

What does this mean for publishers? If you want to maximize your ad earnings, make sure that your website is not only mobile friendly, but that it is also optimized for mobile ads.

Mobile Ad Blocking Is on the Rise

In April, we looked at the impacts of ad blocking software on digital publishers and a report from Adobe and PageFair that showed the use of ad blockers had increased by 48% in the United States from Q2 2014 to Q2 2015. At the time of that report, mobile sites weren’t feeling the impacts yet, but that situation was expected to change due to ad blocking extensions becoming available for mobile browsers.

A new report from PageFair and Priori Data is showing that this expectation is becoming a reality. While the use of ad blocking technology is increasing across the board, global growth for ad blockers on mobile devices is exploding. According to the report, there are now at least 419 million blocking ads on smartphones.

On page 47 of her 2016 Internet Trends Report, Meeker includes this graph to help us visualize the growth of ad blockers in general as well as how the trend has really taken off for mobile devices. 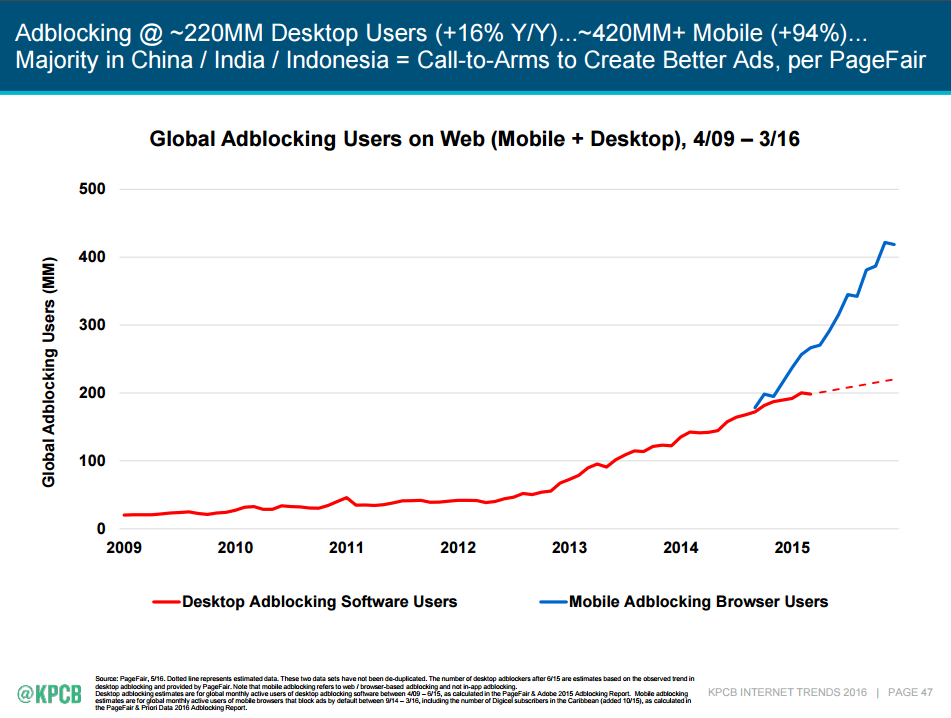 One important thing to note is that at this time, the bulk of this ad blocker growth is in the Asia-Pacific region in countries such as China, India, Indonesia and Pakistan. So, many western publishers may not be feeling the squeeze quite yet. This could change rapidly, though, as more browsers and device manufacturers continue to add support for ad blocking technology – especially in situations where users are trying to improve page load times and decrease their bandwidth consumption.

The Internet Population Is Maturing

A key point made in the 2016 Internet Trends Report is that Internet usage either has reached or is reaching saturation in many locations around the world. Although the number of global Internet users is continuing to grow, the rate of that growth has been fairly flat for the past few years.

In fact, if you exclude India from the global numbers, the year over year growth rate is actually decelerating. There are currently over three billion global Internet users, and that number represents about 42% of the world’s population. 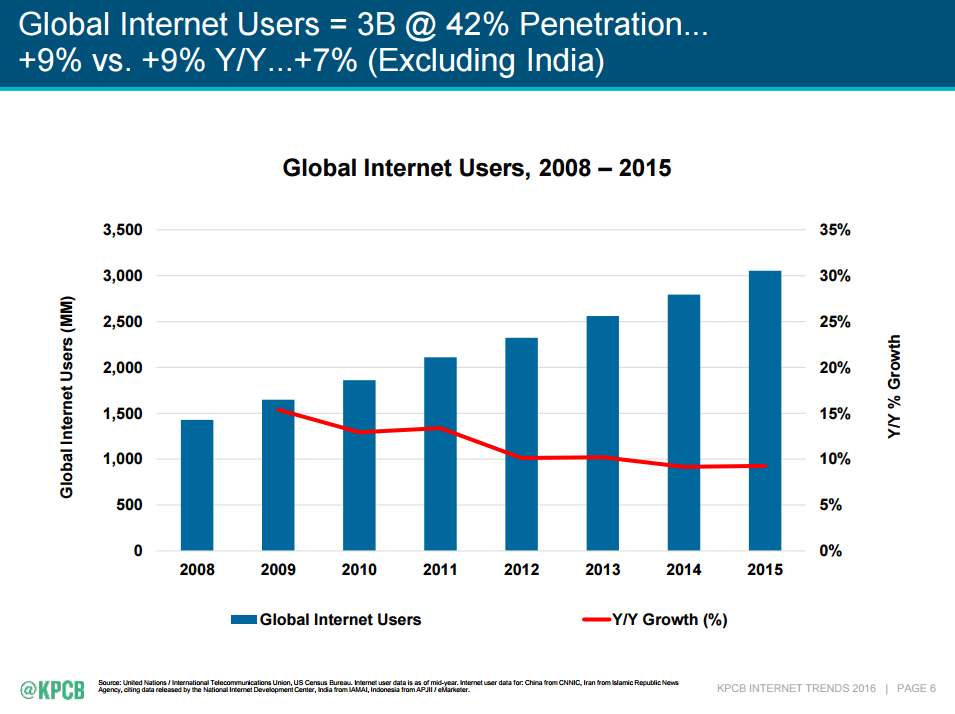 In most locales, we can expect this growth rate to remain flat or start to decline since the areas with medium-low to low barriers to Internet adoption already have a fairly high penetration.  That is, in terms of raw numbers, most of the growth potential today is in population markets with significant barriers to adoption – such as low literacy rates and low income levels.

So, what does this have to do with advertising?

The Internet user base is maturing as “new” users are starting to make up a smaller and smaller percentage of the total Internet population. As an Internet user becomes more established, the way that user perceives and interacts with ads changes.

As an example, Ofcom’s Adults Media Use and Attitudes Report 2016 noted a significant difference in how new and established users perceived ads shown in Google Search results. In the study, newer users were defined as those who first went online less than five years ago, and the established users group included everyone else.

In one part of the study, adults who use search engines were shown an image of Google Search results for the phrase “walking boots” in which the first three results were “distinguished by an orange box with the word ‘Ad’ written in it.” They were then asked if any of the following statements were true:

Participants could choose more than one response if they felt multiple statements were true. A summary of the responses is shown below. 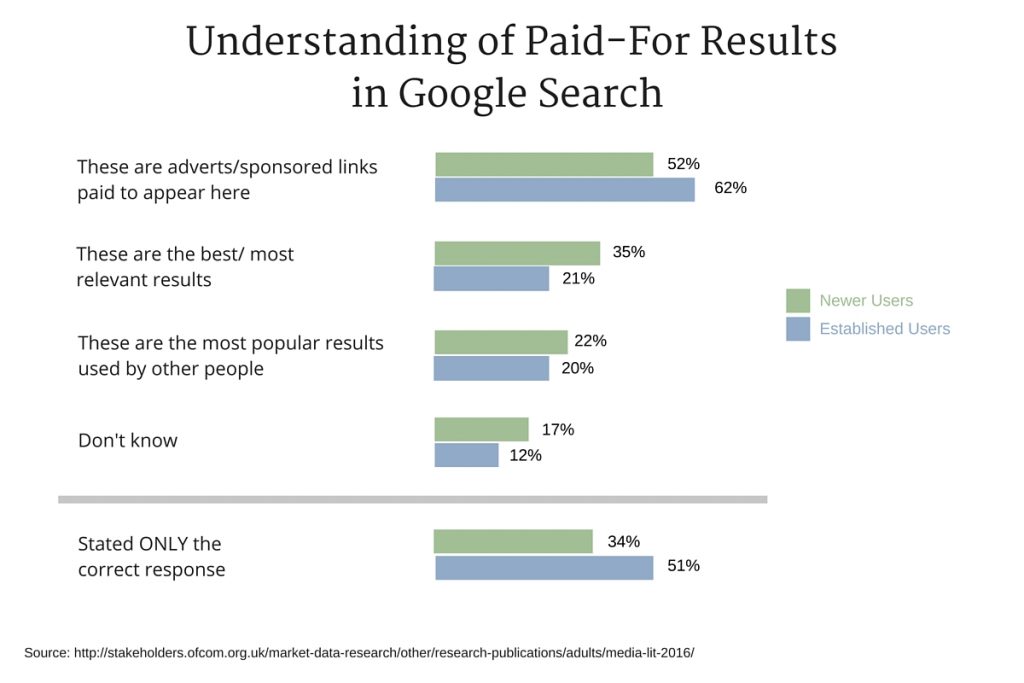 In the same study, when users were asked more generally how confident they were in knowing what is advertising and what is not when seeing or reading things online, 86% of established users said they were either very or fairly confident. Only 64% of newer users said the same.

Looking Towards the Future

The good news for publishers is that advertisers are continuing to up their Internet advertising budgets, especially for mobile ads. The growing use of ad blockers, however, is making it harder to get these ads in front of new eyes. A major concern for publishers for the rest of 2016 and beyond will be how to deal with the ad blocking issue and increase ad viewability on their sites.

Hand in hand with this, the average Internet user is becoming more seasoned and is more likely to be influenced by higher quality ads that are in line with the user’s personal preferences.

To meet these users’ expectations, publishers who haven’t started doing so yet, may want to begin testing different ad formats and layouts in addition to investigating alternatives to their existing ad networks – especially those that offer more options for mobile apps and websites.