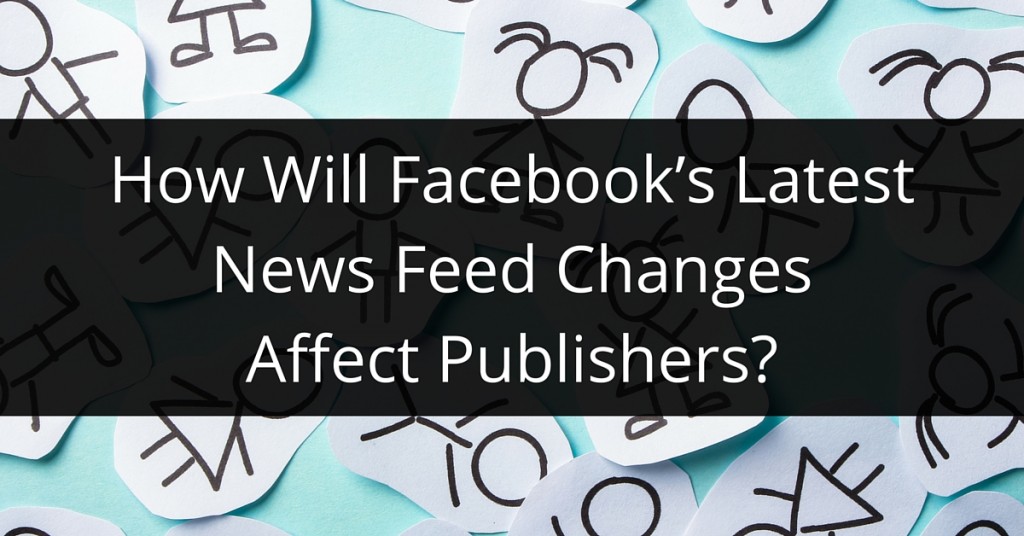 April 21, Facebook announced that it was, once again, making a change to the method it uses to decide which stories are shown at the top of a user’s News Feed.

Announcements like these tend to concern many publishers – especially if they have been getting a lot of referral traffic from Facebook – since even minor changes can have a major impact on social media referrals. However, this particular change could be a very positive thing for publishers who focus on high-quality content and creating a positive user experience.

What does the change entail? Facebook will now consider how much time is spent viewing an article after it is clicked as part of its collection of factors to determine News Feed ranking. That is, if all other things are equal and users spend more time looking at Article A after clicking on it than they do with Article B, then Article A will have a greater chance to be shown in a user’s News Feed. Additionally, Facebook states that it “will also be looking at the time spent within a threshold so as not to accidentally treat longer articles preferentially.”

It seems like this update’s primary focus is to improve the experience of mobile users since the announcement made specific reference to mobile web browsers and Facebook Instant Articles. In addition to this change, Facebook also plans to modify its algorithm to improve News Feed diversity “to reduce how often people see several posts in a row from the same source in their News Feed.”

Over the past couple of years, many brands and publishers have been disappointed with their declining organic reach on Facebook. As reported in TechCrunch, a study from EdgeRank Checker found that organic reach dropped from 16% in February 2012 to 6.51% in March 2014. Despite the cries that Facebook is purposefully declining to show organic content from publishers in an effort to get them to spend more on advertising, the main reason for the decline in organic reach is simply that more content is being shared on Facebook.

For any user on Facebook, there are a significant number of potential stories that can be shown on the News Feed – posts and pictures from friends as well as posts shared by brands and publishers followed by that user. That number climbs even higher when you throw in sponsored posts that target the individual.  Unfortunately, showing all shared posts isn’t an option. In fact, at one point Facebook stated that on average, there are 1,500 potential pieces of new content waiting for you each time you visit the site. If you have a lot of connections or have liked a lot of brand pages, that number could be 10 times higher or more.

Figuring out which stories are most relevant to a particular user is no easy task, and Facebook is always looking for ways to improve its algorithm. According to Adam Mosseri, VP of Product Management for News Feed at Facebook, “We believe that our role on News Feed is to help people connect with the stories that matter to them most.” This makes sense, because the more engaged someone is with their News Feed, the longer they stay logged into Facebook. This is a good thing for Facebook – and for publishers and advertisers as well.

This latest update is part of a larger effort to continually refine the algorithm that Facebook uses to decide which stories are likely to be most relevant to an individual and to increase the amount of time users spend on Facebook.

Recently, Adam Mosseri gave a nice talk on how Facebook’s News Feed works to get the right content to the right people. The 9.5-minute presentation is available in video format on the Facebook for Developers page. The screenshot below was taken from the video when Mosseri was giving a brief overview of how Facebook decides what to move to the top of a particular person’s News Feed. 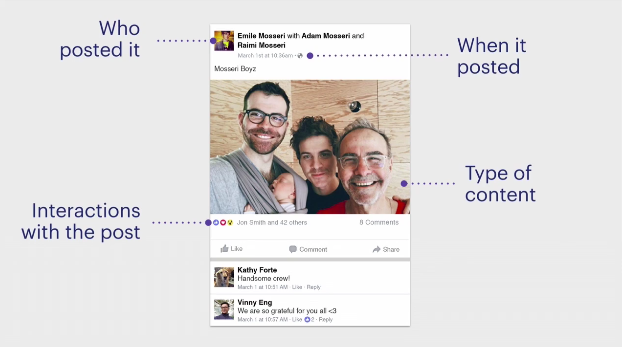 Mosseri explains that each story is scored based on a wide range of factors for each person it is shared with, and that score is used to predict how interesting the story would be to those people. Some of these factors include:

With this latest update, if the story was a link to an article, the algorithm will also predict how long you will spend viewing the content and include that as part of the scoring.

After that, Facebook uses the scores to determine which items to show at the top of someone’s News Feed. Note that these scores are all calculated for each user separately – something may score high for one person and low for someone else.

Like Google’s Search algorithm, Facebook’s ranking system has grown in complexity over the years. Lars Backstrom, Director of Engineering at Facebook, has been quoted as saying that there are as many as 100,000 individual weights in the model that produces News Feed. Of course, what all these factors are and how much weight each of them has is a closely guarded secret.

What This Update Hopes to Solve

In order to predict how likely a user is to be interested in a shared story, Facebook has used a number of signals (both positive and negative) over the years, such as:

The trouble is that these signals don’t always correlate with user interest. However, initial studies seem to suggest that time spent viewing an article is a good indicator of how interesting it is to a reader. As more data is gathered and analyzed, it’s likely that Facebook will continue to tweak how much weight is given to this factor.

Even though Facebook has stated that the time spent viewing content will be measured within a threshold so as not to give longer articles more preference, length and depth are still going to matter to some degree, depending on what that threshold is. So, while this ranking factor may reduce referrals to sites that use deceptive headlines and other click-bait tactics, it could actually help a lot of small to mid-sized publishers who focus on producing high-quality, in-depth content but have had some trouble gaining visibility on Facebook.

On top of that, the diversity tweak could help publishers who are often drowned out by bigger names that post to Facebook multiple times a day. According to the announcement:

If it’s been a while since you experimented with your Facebook marketing strategy, now may be a good time to start that up again. You may be one of the publishers who benefits from these changes.