Content quality has become a hot topic in the last month in the world of online publishing. The new Facebook clickbait algorithm —that was added recently — will constrain websites that embellish, distort, and withhold critical information from appearing in the news feed of their 1.71 billion (monthly) active users. The new clickbait initiative is aimed at restoring the Facebook newsfeed to show stories that are relevant to users through a ranking system that displays the most important stories first.

Additionally, the quality team at Facebook has manually designated thousands of article titles from past “clickbaity” articles and assigned them a score to prime the new algorithm.  We’ve all seen them in our newsfeed, articles like  “You’ll never believe who Kim K was seen strolling with” and “When she opened up the closet and found this…I was shocked!” 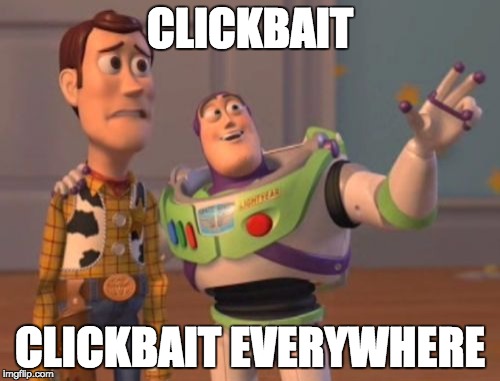 All of these phrases have now been assigned a score based on how intolerable Faceboook feels they are for their users.

The fact of the matter is that there is so much competition for reach in the Facebook newsfeed there is no longer room for lower quality news articles. As people add more friends, follow more celebrities and like more pages, there is a finite amount of time they can spend reading their news feed.

According to Brian Boland (VP of Advertising Technology – Facebook), “Of the 1,500+ stories a person might see whenever they log onto Facebook, NewsFeed displays approximately 300. To choose which stories to show, NewsFeed ranks each possible story (from more to less important) by looking at thousands of factors relative to each person.”

The good news is Facebook publishers have the opportunity to reform how they communicate with their audience and continue driving traffic to their websites.  Facebook values “authentic communication” on their platform, and will reward publishers who produce quality content with bona fide headlines.

“[backlinks] are still important, but there are a lot of different facets. We have categories and subcategories of affinity.” – Lars Backstrom (Facebook’s Engineering Manager for News Feed Ranking)

Facebook’s ranking system, which was previously known as Edgerank, is now a complex machine learning algorithm.  In the past, the main ranking factors were centered around affinity, weight and time decay.  While those ranking factors are still at the forefront, the new system has over 100,000 factors that are weighted in the model.

Last month, Lars Backstrom (Facebook’s Engineering Manager for News Feed Ranking) openly discussed some of the news feed ranking factors with Marketing Land.  While considering the roles of affinity, weight and time decay, Backstrom stated these are “still important, but there are a lot of different facets. We have categories and subcategories of affinity.”

An example of this would be a news update that’s posted to 100 users.  If out of those 100 users,  only a few interact with it, it may not show up in your news feed.  Conversely, a newsfeed article that has a lot of interaction (likes and shares) may be shown in your feed as well.

Another important consideration is the relationship setting that each facebook user has control of.  You can designate a friend as a close friend, an acquaintance, or other, and you can check how you want to receive updates which is subdivided by – all updates, only important, or most updates.

If you are a publisher that relies on Facebook to reach your visitors, there are a few important things to consider.

Take Facebook’s advice and add value! Create and publish a wide variety of content that is interesting and will have high engagement.  Learn and understand your audience and your facebook fans, and attract shares, comments, likes, and clicks!