How your revenue from AdSense, Google Ad Exchange, and other ad networks and ad exchanges change during the seasons.

At Ezoic, we have the luxury of being able to track and view the online advertising market across thousands of websites that all use hundreds of ad networks and exchanges.  One advantage of being able to do this is that we’re able to see trends that affect all websites and are able to distinguish between something that’s potentially gone wrong with a single website vs wider trends or seasonality.

Every year – about this time in late December – we start receiving messages asking about revenue decreases on individual sites.

Why Ad Earnings Are Lower In January For Most Publishers

Almost without fail, the cause tends to be the time of year, so we thought that we would share a little data about how advertising rates change during the holiday season and into January.

Using a fixed set of websites, we analyzed the effective CPM (eCPM) of those websites from November 2014 through January 2015.  Here is what that looks like: 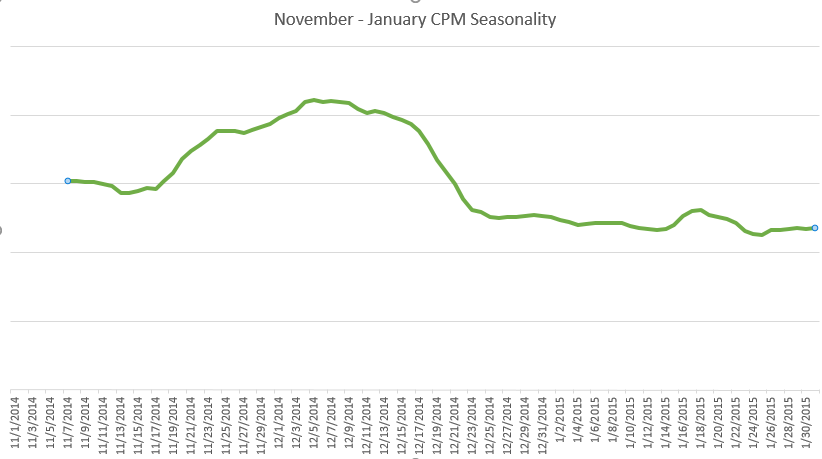 There are two interesting things to note.  The first is that ad rates increase dramatically in mid-November and continue at a pretty high rate until late December.  The second is that starting December 19th or 20th (presumably the end of the online shopping season), rates drop to a level considerably below the rates of not just mid-November, but well below those at the beginning of November.

How do AdSense CPMs change

This, of course, begs the question – how doAdSensee CPMs change over the course of an entire year? 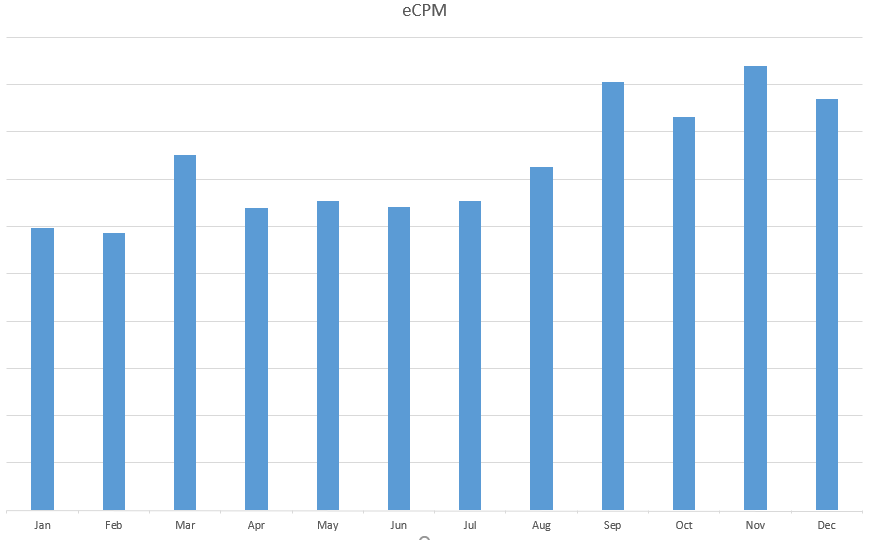 As you can see, online advertising is very heavily skewed toward the fourth quarter of the year – with small bumps in March and September.  It’s important to keep this in mind when looking at your website’s revenue over time or comparing different time periods.

Another thing to consider is traffic to your site.  Traffic to informational websites tends to decrease during holidays and very drastically during the summer when students aren’t at school and many people aren’t at work.  Traffic shifts often affect overall revenue but aren’t always reflected in the CPM graphs.

So, what does it all mean?

The big takeaway is that online advertising is a very up-and-down industry and there is a lot of seasonality and factors at play that determines how much you get paid for your ad inventory.

So, if you see a change, it’s always best to dig into the data first to make sure it’s a regular occurrence and, if it is, then don’t worry about trying to react to it. Just understand that there are fluctuations and that you should focus on what you can control – great content.

On the advertising side, Ezoic is always working to maximize what you earn.  We have more than 1,000 ad networks and exchanges competing for your inventory and utilize real-time bidding, header bidding and an advanced machine learning system that manages it all to ensure you’re earning the most possible, regardless of the time of year.

IMPORTANT DISCLAIMER: The data shown above is from hundreds of sites that use the Ezoic Platform.  The websites that use the Ezoic platform tend to be informational and educational in nature.  Each website, depending on its content and audience, will have its own unique traffic and eCPM pattern.  For example, while ad rates overall decline drastically in late December and early January, rates in the exercise and diet niches tend to increase.  It’s always best to look at previous year and compare the trends from those to what’s currently happening on your site to help you understand it better.

Whitney is a former writer and journalist for several nationally syndicated news outlets and media businesses. She is a creative marketing professional that works directly with publishers at Ezoic and is a professional photographer. Whitney also produces several digital video series that live on YouTube.