AdSense allows you to track the ad viewability of impressions served on your site. Why is it important to monitor Active View- and is it the whole story?

It’s increasingly important to not only know how many impressions are served on your site, but also how many of those are actually seen by your users.  This has been heralded by Google for some time- with a metric known as Active View. Advertisers buying impressions in the Google Display Network can now pay by bidding on the number of impressions based on whether they have been viewed by a user (vCPM) rather than simply requested or clicked on. Google is ‘working to incorporate’ this metric across their suite of products so it’s a good idea to get in early and start tracking your ad viewability now. [1] 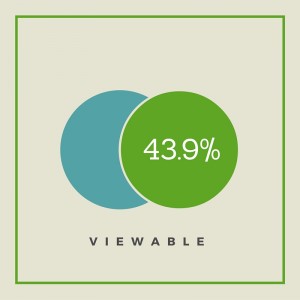 According to Think With Google, only 43.9% of all impressions served are viewable!

What is ad viewability?

It makes complete sense for advertisers to try and increase the number of ads that are actually viewed; because this means that they are only paying for impressions with a chance of being noticed by a user.  The DFP help center says that going into the future ‘publishers with the most viewable inventory will be in the best position to earn more revenue from this trend.’ [2]

The Active View metric follows the example of the Interactive Advertising Bureau (IAB) on classifying the viewability of ads- if half of an ad’s pixels are visible on screen for one continuous second or more, then a user is deemed to have ‘viewed’ it. [3]

It’s an important long term play for all publishers to take note of- as Active View Viewability metrics are only set to increase in importance!

Q) Which ad position is generally most viewable?

Where are the most viewable ads at?

B! It may be surprising to many people, but the spot on a site which is statistically most viewed is not the top of the page- it’s the area just above the fold.  Fun facts from Think With Google:

Obviously, there isn’t a one size fits all solution because users interact in different ways with different sites- the best way to make sure your ads are being seen is to monitor the different units and find out what works!

You can find the Active View Viewability of your ad units by navigating to the ‘Performance Reports’ section of your AdSense account. Select ‘Report Type > Ad Units’ and click on the ‘Active Views’ tab of the top bar. This allows you to see the viewability of your different ad units!

The benefits of monitoring the positions of your ads which score well for Active View Viewability are obvious, as it gives you a means of increasing the value of your ad real estate.

How Ad blindness comes into play

For example, how many of your users are repeat visitors? Readers returning regularly to your site means that they value your content- good news! This is great in one way- but also poses its own problems to a webmaster who is trying to monetize their site effectively.

The more a user views the same ad unit over repeat visits, the less effective it is going to be. They are ‘likely to become blinded to the position of the ads over time.’ [4]
So you want as many of your ads as possible to be measured as Active View Viewable, but when they are on pages frequently viewed by the same users, they can become less effective. To combat this apparent Catch-22. the DFP recommends a ‘diverse ad experience’ to increase overall ad engagement and overcome the phenomenon which has become known as ‘banner blindness’ [5]

Begin by identifying your most popular content. In your Google Analytics account, go to the ‘Reporting’ Section of the Dashboard. Scroll down the left hand menu to ‘Behavior’ > ‘Site Content: All Pages’.

This gives you a breakdown of your most visited pages, on which you can focus your initial efforts. You can even break this down further by going to ‘Add Segment’ and selecting ‘Returning Users’ – this shows which pages your repeat visitors look at most often.

Trying out different ad sizes, positions, and styles on these pages will ensure that you keep things fresh, and get your ads noticed!

Better yet, you can test thousands of combinations automatically using this free tool. Either way, the best way to concur viewability woes is to test and use objective data to make decisions about your site’s ads.