The world of digital publishing is fast-paced and constantly evolving. If you want to stay at the top of your game, there are a lot of things to keep track of – including ad trends that could impact your site’s earnings.

Due to growing concerns about banner blindness, ad quality and the use of ad blocking software, publishers are experimenting with different strategies to make ads more relevant for their audience. To make things even more complex, many site owners are still having trouble monetizing their mobile traffic. There may not be a magic solution on the horizon, but there are several opportunities for publishers as we move deeper into the second quarter of 2016.

The use of native ads is on the rise – even AdSense is jumping on the bandwagon by letting publishers opt in to show ads in Matched Content units. Advertisers are also starting to do more than just dip their toes in the water. A survey by the Association of National Advertisers found that 68% of B2C marketers and 59% of B2B marketers expected their native advertising budgets to increase in 2015.

Even if you’re not quite sure what a native ad is, you’ve probably seen one. Although definitions vary depending on who you ask, Wikipedia gives a pretty good summary of native advertising:

Native advertising is a type of advertising, usually online but feasibly elsewhere, that matches the form and function of the platform upon which it appears. In many cases, it manifests as either an article or video, produced by an advertiser with the specific intent to promote a product, while matching the form and style which would otherwise be seen in the work of the platform’s editorial staff.

While native ads do help overcome the issue of banner blindness and can be excellent sources of revenue for publishers, there is a bit of a debate over how clear it should be made to ad viewers that a native ad is, in fact, an advertisement. In a survey conducted by Contently, only 48% said that they understood a story labeled as “Sponsored Content” was paid for and influenced by an advertiser. Moreover, 66.6% said they had felt deceived when realizing that an article or a video was sponsored by a brand.

So, what an advertiser or publisher considers to be a clear labeling of an ad isn’t quite the same as that of a significant portion of the ad’s audience. Where do you draw the line between “matching form and function” and being deceptive? As native ads continue to grow in popularity, this is an issue that may cause a struggle for many digital publishers.

In the past, many publishers – especially those who managed small to medium sites – were satisfied to use AdSense as their main ad network due to its ease of integration, high fill rates and minimal sign-up requirements. Now that click-through rates are dropping and lots of other competitive ad networks and platforms have entered the game, publishers of all sizes are starting to re-evaluate their monetization strategies.

In particular, Facebook announced in late January that the Facebook Audience Network (FAN) is expanding to include support for mobile websites in addition to mobile apps. Like AdSense, FAN has no shortage of advertisers and is easy to set up – no SDK integration is needed. To learn more or to sign up for the open beta, visit the Facebook for Developers site. The image below gives a few examples of how Facebook ads are being incorporated into mobile websites. 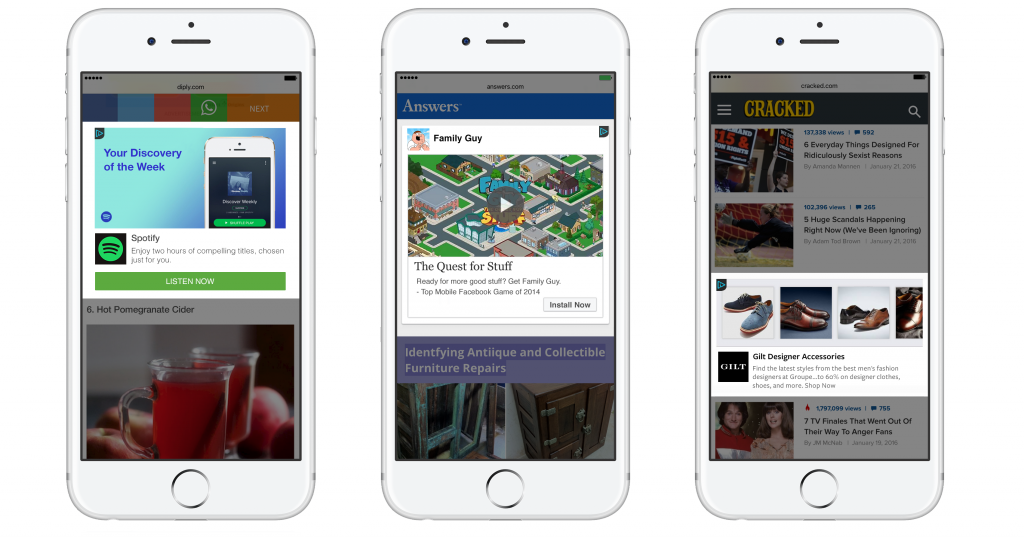 Some analysts are predicting that FAN could take a big bite out of AdSense with this move, especially since the network is leveraging the huge amount of data Facebook collects about its user base. This could lead to AdSense taking measures to become more competitive and really shake things up – in a good way – for publishers.

The usage of ad blocking software is no longer limited to just a small sampling of the Internet population. A report from Adobe and PageFair found that ad block usage had grown to include 45 million active users in the United States in Q2 2015. That’s an increase of 48% year over year.

At the time of the report, mobile sites were barely impacted by ad blockers with less than 2% of ad-blocked traffic coming from mobile devices. We can expect that number to grow as mobile browsers continue to evolve, such as with iOS 9’s recent allowance of content blocking extensions for Safari. This could have a significant impact since Safari accounted for 55% of the mobile (including tablet) browser share in the United States and 22% worldwide in March 2016, according to StatCounter.

This mounting trend is already having an impact on many publishers who count ad earnings as a major source of revenue. Going forward, these publishers will need to come up with a strategy that discourages people from using ad blocking tools, integrates ads that are not blocked or incorporates other forms of monetization if they are to survive.

Over half of all Internet usage time is now spent on mobile devices, so having a mobile-friendly site is a must for digital publishers. Being mobile-friendly isn’t enough, though. Page load speed is a constant source of frustration for mobile users, since many mobile sites are slow loading and bloated. This has led to the development of formats such as Facebook Instant Articles and Google’s AMP.

How does this relate to ads? Well, ads can have a significant impact on page load time – especially if the ad networks being used are not optimized for best performance or don’t support the use of asynchronous ad codes. While many publishers are already taking these factors into account when evaluating potential ad networks and platforms, they are more important than ever now. Additionally, publishers who plan to offer AMP versions of content for mobile users may want to ensure that their ad networks are AMP-compliant.

As the competition between FAN and AdSense heats up and more ad networks begin to either follow the leaders or develop innovative alternatives, it will become easier for advertisers – even those without a dedicated creative team – to create better ads for their products and services. In addition, the growing usage of mobile-optimized formats will push those ad networks who haven’t done so already to work on improving load times across the board.

When you add wider adoption of native ads into the mix, there is the potential to start seeing higher quality ads in all formats. The end result should be a better overall ad experience for users, which is great news for publishers who are concerned about ad blocking and other issues impacting ad earnings. The myriad of changes happening right now may seem a bit chaotic but, all in all, it is a very exciting time for both advertisers and publishers.