A website visitor’s experience — once they land on a digital property — is the supreme currency that the digital publishing industry is built upon. The ability for quality digital publishers to exist with longevity, and to profitably grow their businesses, relies on positive website traffic behaviors. The problem is that publishers are often torpedoing these experiences and apparently don’t even know it — according to recent research.

We recently conducted a study across 15 websites from 2 different niche verticals (Sports vertical and Health & Beauty vertical).  In this study, we found that there were multiple instances that the publishers had delivered different visitor segments sub-optimal experiences. The study examined common user experiences metrics, advanced visitor behavior metrics, and ad earnings metrics for these websites. 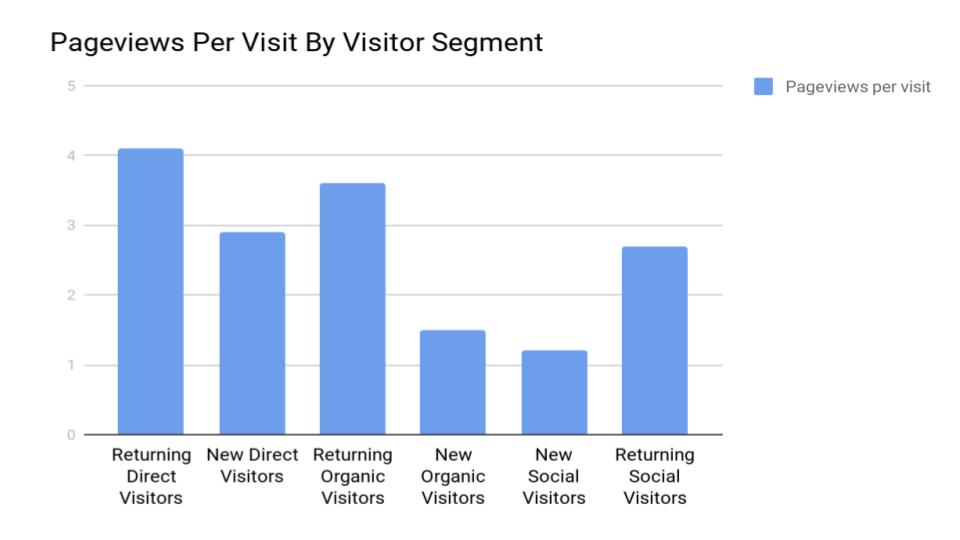 There are actually hundreds of different ways this data can be spliced up, but we’ve chosen just to divide a common portion of the audience into two segments to highlight one of the key takeaways from the study. We are looking at two traffic sources and two types of visitors (of which there are hundreds). 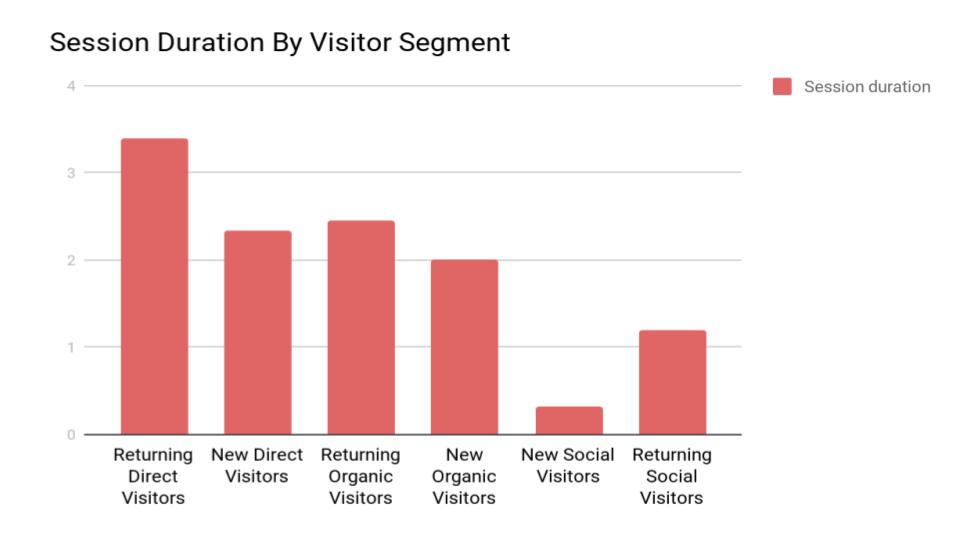 As you can imagine, all the visitors behave differently; meaning they all influence their respective websites in different ways. Their behavior directly influences the total revenue these publishers generate and other traffic acquisition factors like search engine ranking position (SERP) and social media Edge rank.
But, just how malleable is their behavior?
Believe it or not, website traffic behavior is not like the weather. Publishers can actually do a lot to influence these core metrics like pageviews per visit and session duration. Unfortunately, in our research, we’ve learned that publishers are not often looking at the right factors when optimizing their website traffic, or work towards site averages that actually deliver some visitor segments very poor experiences; resulting in losses in traffic and less revenue overall.

One of the most impactful things a publisher can do to test and improve the visitor behaviors on their site is to test ad placements, density, and types. We’ve done other studies on this before, but just looking at the data in this study, look at how these sites were influenced by simple changes in ad density alone. 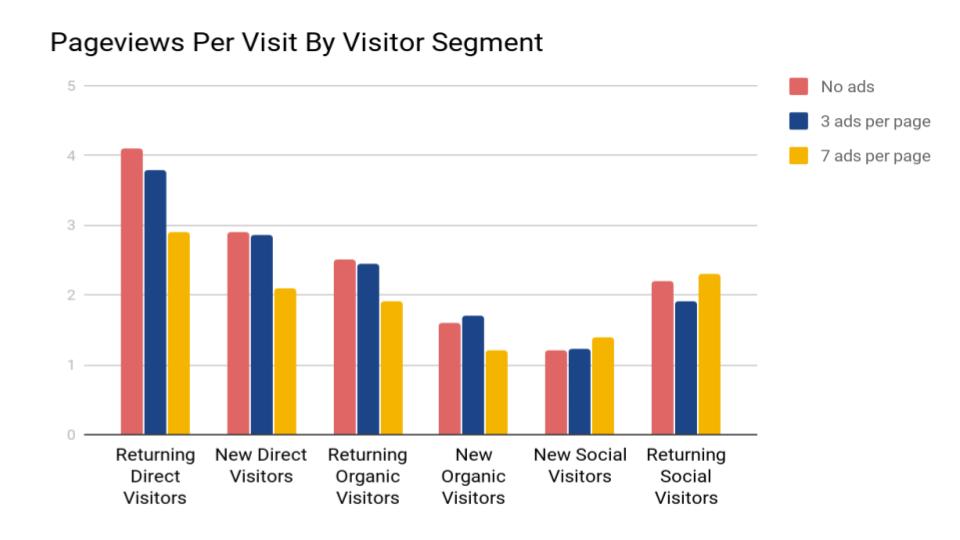 Looking at the data above, we can see just how impactful adjusting the ad density can be. In many cases, showing visitors the sub-optimal number of ads is costing them 1.5-2 pageviews per visit! Furthermore, some of this data is actually pretty counterintuitive (for example: some visitors actually visited more pages when 7 ads were shown vs no ads). 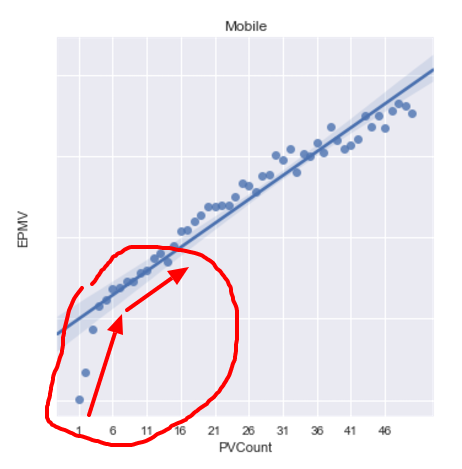 As we’ve shown before, in prior research, those initial pageviews offer — in some cases — exponential differences in revenue. Furthermore, we see that ad density is also having a major influence on bounce rates; which has a direct effect on a website’s organic search traffic and social media traffic. 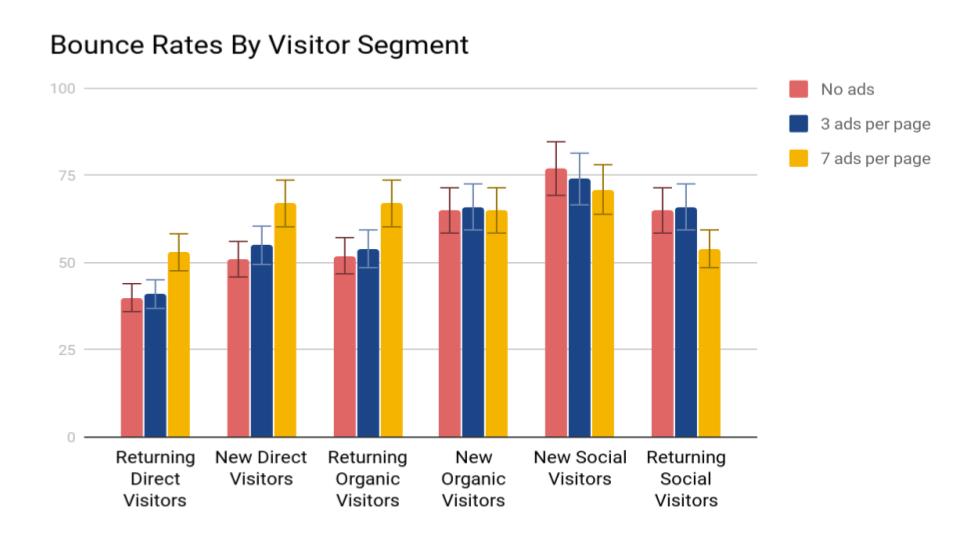 This is evidence that a single element — such as ad density— can have a direct and dramatic effect on website traffic behavior. By adjusting ad density by visitor segment, publishers can effectively increase pageviews, extended sessions, and decrease bounce rates. This results in higher earnings per thousand visits (EPMV) as a result of the elongated sessions.

How website visitor behavior may be influencing organic traffic

One of the trends that is sort of hard to measure in this environment is just how impactful these changes in website traffic behavior can be on the traffic itself. For example, by reducing bounce rates through adjusting ad placements and density by visitor segment, can a publisher positively impact their organic traffic (i.e. will search engines reward these improvements)?

Given all the variables, it is really hard to draw direct correlations, but it is a trend we’ve seen across all the sites. Above, you can see a case study of a single site that leveraged Ezoic’s machine learning to automatically adjust ad placements, locations, and types based on visitor behavior. It was the only change made in the time period shown. It was an evergreen content site that was stagnant until the machine learning was applied.

Not just ads, navigation influences this too!

As you can probably imagine, ads are not the only website element that impacts these website behaviors. Applying just the same two traffic filters we did before, look at how mobile menus affected the exact same website traffic. 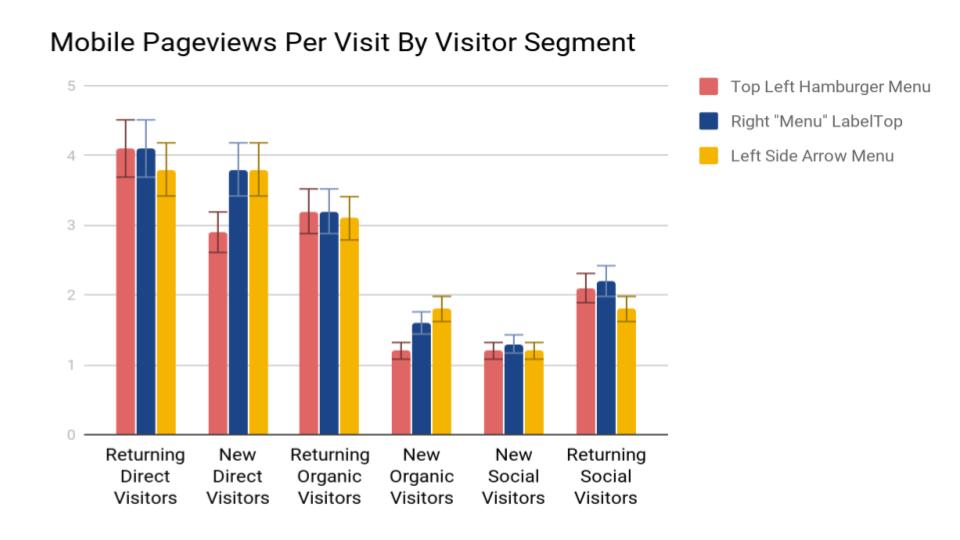 In many cases, the type of mobile navigation menu used on the site impacted pageviews as much as ad density did. We saw similar correlations with bounce rate and session duration as well.
This is more evidence that not only is visitor behavior malleable, but that publishers may be able to influence it much more than what was previously thought. It may serve as a strong motivation to begin looking at how traffic segments behave and what could be done to improve each of their sessions.

The impact of events on how website traffic is monetized

Finally, one of the last things we’ll look at from this study in this blog post will be just how unique events can impact both traffic and revenue; and how profits can be made or lost by preparing for these instances. In this case study, we will be looking at a single sports website that we pulled out of the aggregate study above. 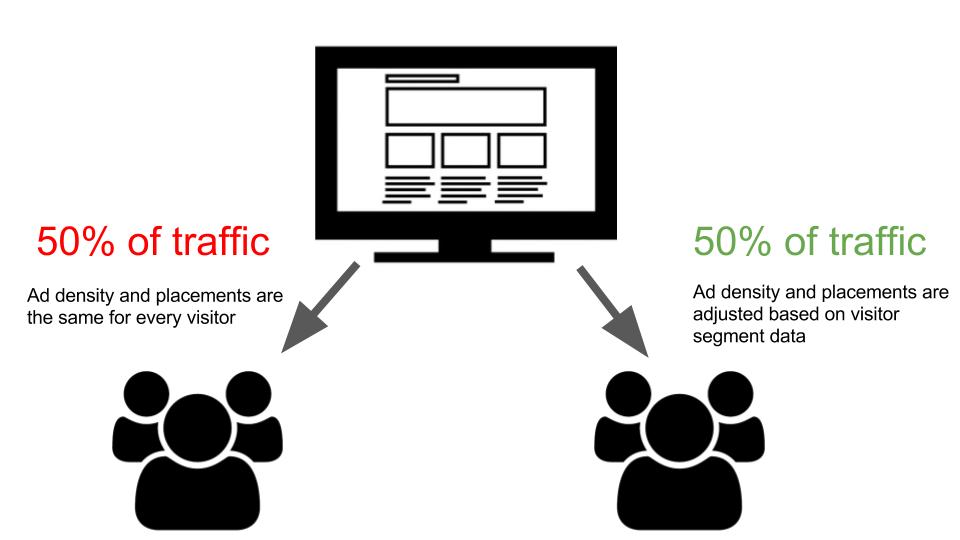 This particular website receives the majority of its traffic from return visitors; both directly and organically. As highlighted above, you can see that 50% of visitors receive the same ad placements, density, and locations — they were set based on what averaged out to produce the lowest bounce rates and most pageviews per visit. The other 50% had ad density, placements, and types adjusted based on data from previous user sessions.


The differences in these approaches are truly amplified during unique events such as the one shown above in figure 1. That red line is intraday reporting for the date listed. The blue and green lines are previous dates. That red spike is showing a major jump in sessions, ad impressions, and pageviews.

This spike was due to the injury of Deshaun Watson, a star American football player. This site had a large amount of news on this topic after the major injury was announced to the public; which flooded the site with new visitors — many of which came from social media.
This traffic spike included a massive amount of visitors that were different from the typical audience the site receives (direct/return). This meant that the static 50% of traffic that all saw the same ad treatments saw a much lower EPMV than the traffic that received customized sessions based on visitor segmentation. 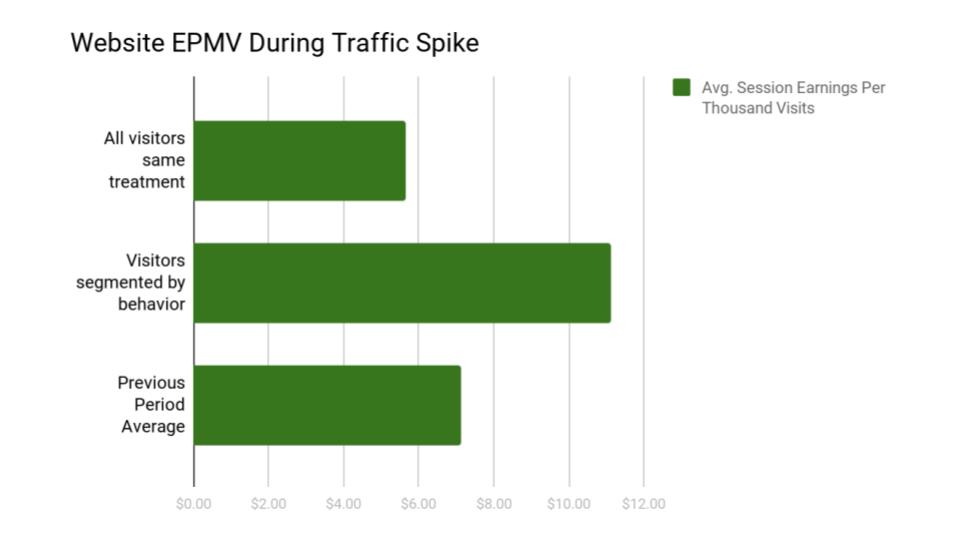 This chart demonstrates that a large amount of revenue was left on the table by treating many of these non-ordinary visitors during this event as they would their most common visitors. In this same case study, we also saw higher bounce rates and fewer pageviews per visit among the non-treated percentage of traffic as well — demonstrating that they also had worse experiences as well.


What can we take from this information?

There are actually a lot of takeaways in this data, and there was a lot more in this study that I’ll be sharing on the blog in coming weeks, but the biggest in this article is the impact of visitor segments on monetization and website traffic.
If you want to provide your visitors with better experiences (which almost all quality publishers do) this is really something to focus on. The reason why traffic and revenue are affected by segmentation is because of the impact it has on visitor behavior. This behavior can obviously be influenced by changes made by the publishers. The problem is that every segment prefers different changes.
This is the key takeaway from this data. Don’t’ treat all visitors the same (ads, navigation, etc.). And, if you are going to treat them differently, use data to do so.
Other interesting reads and notes: