One a weekly basis, I talk to digital publishers that have seen a major drop in either traffic or revenue (commonly both). They’re trying to decipher why they’ve experienced the sudden shift. In many cases, the seemingly unprecedented change leads publishers to assume that the problem is related to Google traffic drops (search mainly) and that the corresponding drop in revenue is directly tied to this change.
What I’ve come to learn from hundreds and hundreds of these cases over the years is that every problem is relatively unique; however, there are usually some pretty easy ways to zero in on the exact issue causing the drop in traffic and revenue.
The secret to quickly solving these problems is approaching them like a puzzle. You cannot start with an immediate, blind assumption. You have to start with the data first and work backward. In this article, I’ll help you start with the most common ways you can start this analysis.

First, even though I’m sure this will be really hard to understand, you have to separate the two issues here that are likely inexorably tied. Your drop in traffic and loss in digital revenue on your website most be looked at as two separate problems.
While one is almost certainly affecting the other, by separating these problems, you can actually solve the underlying issue faster and potentially recover to greater levels than where you were prior to the downturn.
If you want to diagnose a drop in revenue — try this guide 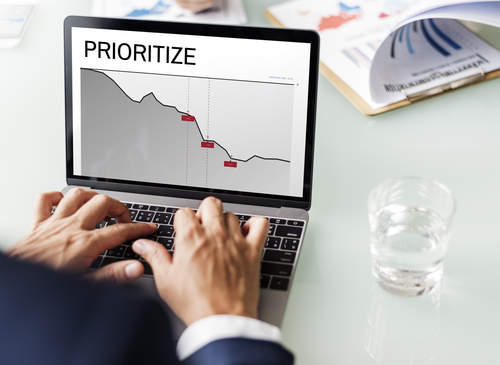 The reason for this is that these things may be connected but may not be correlated in the way you think. For example, you may have a major drop in traffic but only a small drop in revenue. You may be able to decipher (using the methods below) that all the traffic was coming from a particular backlink on a low-quality site that is no longer operational. The reason the traffic may have dropped is obvious, but the reason for only a little revenue dropping is because the quality of the traffic may have been very poor.
Separating these problems and understanding each’s relationship in the equation will give you a much clearer vision of how you will want to approach solving the problem.
Audit your own site using this detailed guide… SEO Audit Your Website On Your Own

Did my Google traffic drop?

This isn’t the right question to start with but it is by far the most common question I get from publishers when they see a downturn in traffic and revenue. The most common belief publishers have is that they have been struck by a “Google algorithm update” and have experienced a loss in Google traffic; along with a corresponding drop in revenue from those lost pageviews.

I can tell you that in all my years of experience, that scenario is actually one of the rarest. In fact, in the past 9 months, I’ve worked with hundreds and hundreds of publishers and almost none of them had dramatic drops in revenue or traffic that we could definitively say were directly related to a shift in the way Google Search operates (if you want to make sure you’re playing nice with Google, try this blog).
Historically, Google search algorithm changes have been a risk for publishers, but now, quality publishers that largely adhere to Google Webmaster guidelines have little to fear.
Google made over 1,500 changes to Google search in 2016, gone are the days of them rolling out massive updates that cause sites to plummet down the rankings. Shifts are much more subtle now and nuanced in their implementation.

That being said, the first thing we have to do with this question is check the premise. Is your drop in traffic really from Google traffic or is it something else? Here’s how to check…
If you don’t already use segments in Google Analytics, now is the time to start. I’ll walk you through a case that I recently helped a publisher with.

A case study to learn from

A publisher contacted me and said that they had just noticed that their Sunday traffic was down almost 70% from the Sunday before and was also down considerably from the day before. They believed (wrongly so) that they had fallen victim to a Google algorithm update.

The first thing I did was analyze their traffic in segments. I wanted to see where the drop was coming from. Was it organic, paid, referral, social, or direct traffic? Was it from a particular country or device? Did it affect some pages more than others? That is the order I always start in…

That little checklist will usually help you identify the macro source for the downturn in traffic. Usually one of these things sticks on our like a sore thumb if the loss in traffic is dramatic. Sometimes it could be multiple things that stick out together (which we will discuss further in my example here)…

You can access and create segments by clicking at the top of the page when you are on Audience > Overview in Google Analytics. Paid, organic, referral and direct traffic are already created for you out of the box.

You can also easily create one for social traffic by clicking on New Segment (see above). Then, name the segment, select traffic sources on the left. You’ll want to go down to source, make sure the field is set to contains, and then start typing the first letter of all social networks you get traffic from into the open bar. Select as many as you like, and make sure to get all variations (i.e. m.facebook.com and fb.com).
Now, back to our example!

After checking traffic sources, it was obvious, this site’s traffic drop was in fact due to a loss in Google traffic. This — at first — seemed to confirm their worst fears; however, it is important to get all the data before jumping to conclusions. 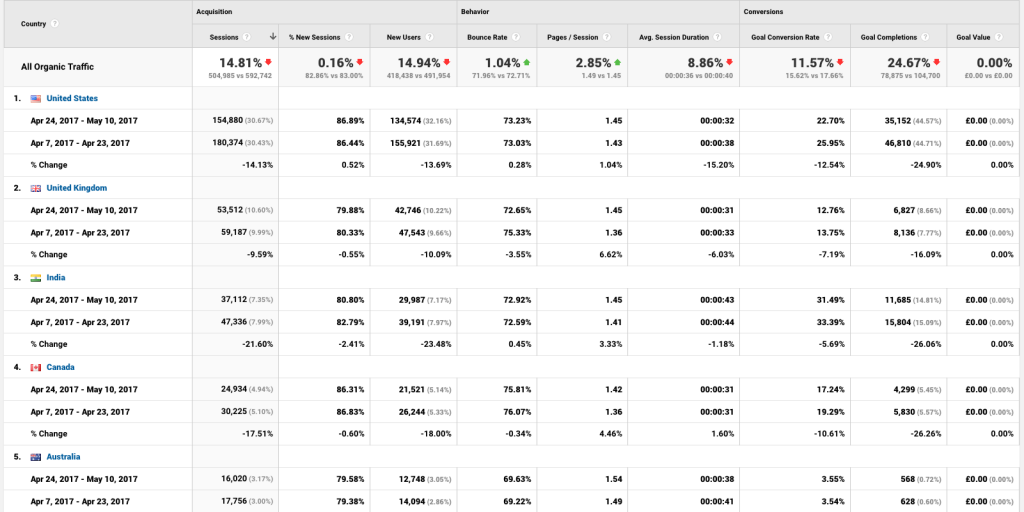 Geo and device type information appeared pretty innocuous. There was less traffic but both of these pieces of data were commensurate — percentage wise — to previous data points. It wasn’t until we got to #4 on my checklist that we had even more clarity to the situation.

There it was, staring us right in the face. The homepage of this website had gotten no organic traffic at all on the day before they had contacted me. So what happened?
First, let’s go through my brain as I’m taking in all this information. Remember, this is a puzzle and we have to be like detectives if we want to solve this puzzle with any degree of certainty. So what do we know about this problem now with the data that we have…

The immediate takeaway in this analysis was that Google search suddenly stopped sending all search traffic to this site’s homepage. Why? It must have been de-indexed. If this was a manual action by Google for a violation, the whole site would be down, not just one page. If the homepage was being penalized by Google and pushed down the rankings for some reason, it is fair to assume they would still be getting a little traffic (not 0 visitors), right?

This left only one conclusion…

This site must have accidentally de-indexed their own homepage. Why would they do this? Well, obviously they did not mean to do this, but how could it have been possible?
When I approached the publisher about my conclusion, their response was that this was impossible. They had not intentionally done this and had not made any changes to their knowledge that could cause this. So, I asked them to think through every change or update they had done to the site the day prior to the downturn. Leave no stone unturned.
Most of what they delivered was pretty unassuming. They published a blog and updated some meta titles. But, there was one other thing. They added a new plugin inside of their WordPress CMS.
Once I examined the new plugin, I noticed it had several settings on it. One of them was the ability to enable no-follow designation on a specific page of the website. Sure enough, this plugin was active on the homepage and the setting for no-follow was checked. This means Google will not index this page!
PROBLEM SOLVED
They removed the plugin and their site was re-indexed by Google and saw normal traffic return within days.

Remember earlier when I said that Google algorithm updates were the rarest cases I see — in terms of drops in Google traffic? Well, do you want to know what the most common reason for web traffic drops I see is? It’s webmaster or publisher error. 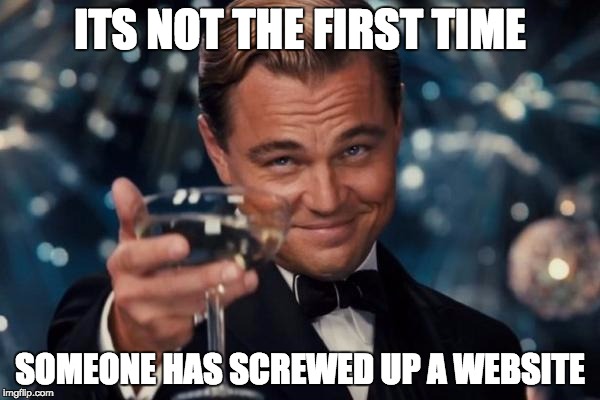 Trust me, I’ve been there. I’ve broken hundreds of sites. That’s why I’m so good at diagnosing and fixing them now!
There’s no reason to feel like an idiot when one these kinds of things happen. Just be humble and work backward until you solve the problem. If you are going to actively try to improve a site, you are going to mess it up from time to time. If you just leave it set, you’ll eventually fall behind. This is all part of the process.
The secret is putting data first. You cannot jump to conclusions or scour the internet for the latest news on the Google search algorithm and assume this is the reason for your loss in traffic.

Breaking down your Google traffic

Following the 4 principles of traffic evaluation above, you should be able to bullet point out all the things you know; like I did in my summary at the end of our case study above. If you can do this, you can start generating a hypothesis as to why traffic may be falling. In most cases, you can test these right away (i.e. checking a plugin).

Another quick example: Another case I got recently, was a publisher who saw a small reduction in traffic gradually over time. We ultimately figured out it was referral traffic from e-mails. He remembered he had recently switched e-mail services for his newsletter. We discovered his new e-mail service was sending far more messages to spam and that was the reason for the drop. He switched his e-mail services back and the traffic leveled out again.

Still having problems? This isn’t what I do anymore, but I’m happy to provide my expert insights in the comments section. Leave your issues below and I’ll chime in with my thoughts and advice. Hopefully, we can all learn from the experiences and get some nice case studies going below.
Or read one of these good blogs on increasing your Google traffic.
https://blog.ezoic.com/preparing-google-algorithm-changes-2018/
https://blog.ezoic.com/3-user-experience-metrics-correlated-seo/